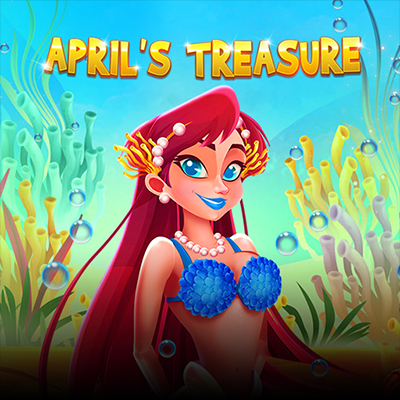 April's Treasures is a three-row, three-reel slot game with 27 ways to win. The game's theme revolves around April the mermaid, who is guarding some of the most sought-after treasures on the seabed. Fill the reels with as many different combinations as you can, and you'll be swimming away with a boatload of cash!The visual and aural aspects of the slot game are in keeping with the game's mystery underwater theme. Other symbols on the reels include lesser paying sevens grouped on starfish and other bar combinations within bubbles, in addition to crabs, oysters, and sea weeds. The game's Wild symbol is April the Mermaid, who may cover entire reels and generate new winning combinations by substituting for other symbols.
If a player lands only one bonus symbol, they will receive 5 free spins, and if they land two bonus symbols, they will receive two free re-spins. All bonus symbols turn into Sticky Wilds for the length of the re-spins, providing enormous rewards for gamers. Landing three bonus symbols on the reels activates the April's Treasure feature game. Players are directed to the beautiful mermaid's chest, where they can win cash prizes worth up to 500 times their total bet.
In addition to the regular symbols and exciting features, April's Treasures has two progressive jackpots. The Mystery Jackpot is won more commonly when it is between $9,000 and $10,000. In contrast, the Super Slots Jackpot is normally won when the prize pool hits $40,000 to $45,000. The RTP of the main game is just 94.4 percent, but when the jackpots are included, it jumps to 95.02 percent, which is near to the industry average.

Take a dive into the all-new April’s Treasures slot gaming universe created by Arrow Edge and swerve the waves with April the Mermaid to grab the many riches awaiting your presence. As April waits on the seabed guarding some of the most sought-after mysteries, the 3-row, 3-reel slot game offers players 27 ways to win. Simply fill the reels with as many new combinations as possible and swim away with humongous cash prizes!The visual and audio effects of the slot game are in keeping with its mystical aquatic theme. Symbols on the reels include the lower paying sevens arranged on starfish, and different bar combinations within bubbles, apart from crabs, oysters, and sea weeds. The mermaid April herself is the Wild symbol in the game and can replace other regular symbols to cover entire reels, leading to new winning combinations.
Landing even one bonus symbol rewards players with 5 free spins, while winning 2 will give you 2 free re-spins, during which all bonus symbols transform into Sticky Wilds for the entire duration, ensuring sizable payouts for players. Landing three bonus symbols, however, triggers the April’s Treasure feature game. Here, players are led by the beautiful mermaid straight to her chest, where players can win cash prizes of up to 500 times the total bet.
Apart from the standard symbols and thrilling features, April’s Treasures also offers two progressive jackpots. The Mystery Jackpot is won more frequently, whenever it is worth anything between $9,000 and $10,000. The Super Slots Jackpot, on the other hand, is normally hit when it is worth between $40,000 and $45,000.
Players are free to join April in her kingdom as long as they are using any smartphone, tablet, laptop or desktop with a supporting browser. The base game RTP may not be very impressive at just 94.4%, but together with the jackpots, it goes up to 95.02%, close to the industry average.