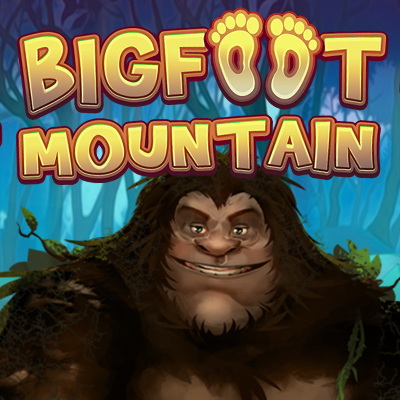 Bigfoot Mountain is one of the most unique and thrilling online video slot games by Arrow’s Edge, that dwells on the premise of the elusive legendary Bigfoot of American folklore. Dwelling in a dense and dismal forest that forms the backdrop of the game, the elusive giant creature must be spotted by capturing its photograph in the polaroid camera. Occasional movements of bushes and trees and ape-like shadows often reveal its presence somewhere nearby. Symbols on Bigfoot Mountain include two fellow explorers, the game logo, the Bigfoot itself, a pair of binoculars and some lesser paying playing card royals A, K, Q, J, 10 and 9. The game features Wild symbols as well, in the form of the polaroid camera, which may cover the entire reel whenever it lands, substituting any other symbol and forming new winning combinations. The Bigfoot footprints might appear on reels 2, 3 and 4, and can trigger the Big Spin feature whenever the entire reel gets covered in these footprints, giving instant rewards.
Though the RTP of Bigfoot Mountain is far from impressive at 94.37%, it makes up for this through its low volatility and Progressive Jackpots feature. Add to that the thrilling soundtrack and amazing visuals, and Bigfoot Mountain is a must try for every slot lover.

Bigfoot Mountain is a 4-rows, 5-reels online video slot game presented by Arrow’s Edge that draws inspiration from the age-old legend of the Bigfoot, a popular creature in American folklore. Every player is part of a group of brave explorers out to hunt the Bigfoot and capture a photograph of the elusive giant. The game has a unique premise to offer, bringing in rewards for those who manage to successfully tap into the rare appearance of the Bigfoot. For its backdrop, the game has a dismal-looking forest lined with several trees and bushes. Often, you might some notice some slight movement in the foliage or spot an ape-like shadow walking around the forest. Add to that the exciting soundtrack and suspenseful theme of the game, and Bigfoot Mountain comes across as an entire package.
The symbols on the reels are quite varied, including two Explorers, the Bigfoot itself, the game logo of Bigfoot Mountain, a pair of binoculars and even low paying playing card icons of A, K, Q, J, 10 and 9. Once you have matched three or more symbols across a reel, you are in for a reward. The Wild symbol on the reels is the Polaroid, which can replace any other symbol on the reels with its appearance. Whenever the Polaroid Wild appears, it can expand to cover the entire reels and all symbols already on them.
The Big Spin feature is another highlight of Bigfoot Mountain. Bigfoot footprints can appear on reels 2, 3 and 4 on the game, and as soon as one of these reels gets completely covered in footsteps, this feature can get triggered. Players win the same number of spins for the Big Wheel as the number of footprints appearing on the reels and can win rewards instantaneously.
Bigfoot Mountain might not come across as a very highly rewarding game when you look at its below-average RTP of 94.37%, compared to the industry standard of 96%. However, the game features Progressive Jackpots, which allow players to win anything between $40,000 to $45,000 randomly during spins. Also, the game volatility is quite low, ensuring that you can really bag the rewards you stake. Overall, the unusual premise, brilliant graphics, engaging soundtrack, multi-language and multi-currency support and array of features make Bigfoot Mountain a must-play for every slot lover.