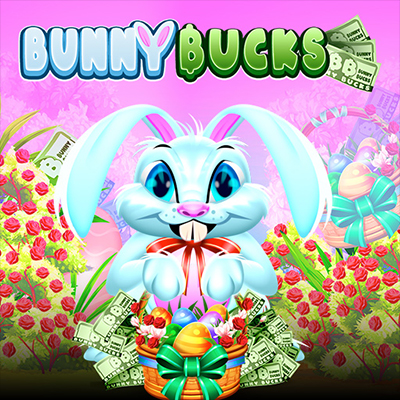 Try the fresh, breezy, and cute Bunny Bucks slot game from Arrow's Edge, which is focused on the happy merriments of Easter. The game is all about flowers, sunshine, and a happy sense of regeneration. The Easter Bunny provides a multitude of fascinating features to the 5-reel, 3-row, 45-pay line slot, along with many gifts and delicacies concealing large jackpots.The low-paying playing card royals A, K, Q, J, and 10, as well as a chocolate bunny, a small chick, a basket of sweets, a money-crowned carrot, and special feature symbols of bunnies and Easter eggs, are all included in the game. Easter Bunny Free Spins and Easter Egg Wilds are two of the most lucrative bonuses. There are also two big progressive jackpots that can be won at any time after any play of the reels.
If three, four, or five Easter Bunny symbols appear anywhere on the reels in a single game, players will get 5, 10, or 15 Free Spins. Free Spins can be re-activated at any time during the game. The Sticky Wilds feature is activated when the golden egg with the red bow appears in a corner position on the reels. The symbol transforms into a Sticky Wild, repeating in four additional positions on the reels and awarding players two free re-spins. Until all re-spins have been used, the Wilds remain in place.
The two progressive jackpots in Bunny Bucks - the Super Slots Jackpot, which pays out between $40,000 and $45,000, and the Mystery Jackpot, which pays out between $9,000 and $10,000 – are the game's most lucrative features. Bunny Bucks is a fun-filled, creative game that hits all the right notes with fantastic game features and a distinctive premise. The low volatility game falls short, with a base game RTP of 93.5 percent and a game RTP adding jackpots of 94.12 percent.

If you have had enough of the hard-hitting goth and adult themes that many slot games are directing towards these days, it is time to opt for the fresh, breezy, and cute Bunny Bucks slot game by Arrow’s Edge! Themed around the festive merriments of Easter, the game is all about sunshine, flowers, and a happy sense of renewal. On the 5-reel, 3-row, and 45-pay line slot you will find the joyous Easter Bunny along with several gifts and delicacies concealing huge payouts. Symbols on the reels include the low paying playing card royals A, K, Q, J, and 10, a chocolate bunny, a little chick, a basket of goodies, a money-crowned carrot, and special feature symbols of bunnies and easter eggs. The highly rewarding features include the Easter Bunny Free Spins and the Easter Egg Wilds. If that wasn’t enough, there are two huge progressive jackpots that can be won at random immediately after any spin on the reels.
Landing 3, 4 or 5 Easter Bunny symbols anywhere on the reels in a single spin awards players with 5, 10, and 15 Free Spins respectively. Better yet, the Free Spins can be re-triggered upon landing more Bunny symbols later into the game. As for the Wild, the golden egg with the red bow triggers the feature each time it lands in a corner position on the reels. The symbol then immediately transforms into a Sticky Wild, replicating itself to another four positions on the reels and awarding players two free re-spins. The Wilds remain in their place until all re-spins are used up. This helps create new winning combinations to earn surprising rewards from!
The two progressive jackpots on Bunny Bucks – the Super Slots Jackpot hit when it is worth between $40,000 and $45,000, and the Mystery Jackpot worth anything between $9,000 and $10,000 – are two of the most rewarding features in the entire game. With superior game features and a fun-filled, unique premise, Bunny Bucks hits all the right notes. The low volatility game, however, does not quite impress with a base game RTP of 93.5% and game RTP including jackpots at 94.12%. The game can be played across the vast majority of smartphones and tablet devices in case you were wondering how to get started with it.