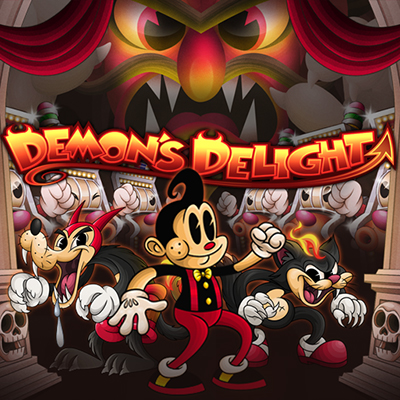 If you're looking for some strange fun with slots, Demon's Delight from Rival Powered is a must-try! In the game, Chip Chaplin, a chaste but charming character, battles the Pit Boss of Perdition underneath.With Fire and Brimstone whirling around the sulfur-scented slot machines, the traditional three-reel, three-row, and five-line slot game is set against the background of the Sin City Saloon. As players advance toward the game's numerous rewards, an underground supervisor keeps an eye on them.
The value of the symbols on the reels varies greatly, ranging from the low paying playing cards with a devilish theme to the medium paying dice, hellcats, and hellhounds. The prizes are slightly higher for the cherry and bonehead emblems, which stand for the fury, disgust, and heat of hell.
A few additional distinctive symbols are also included on the reels, such as the Bat Out of Hell Expanding Wild, which engulfs the full set of reels in a raging rage to produce fresh winning combos. The Hell's Bells emblem might be used to start the Sin City Shakedown Pit Boss fight round. This battle between the pit bosses for Lucifer's treasure is being handled by Chip Chapalin. You must defeat the villain, trigger seven blazing bullet attack symbols during the free spins round, and earn a huge payoff of 100 times your initial wager in order to accomplish this. If they wish to quickly put an end to El Diablo and his wicked plans, players must cooperate with Chapalin and get a few lucky spins!
Your chances of striking it rich increase along with the heat in Sin City Saloon! This low-volatility slot game keeps players sitting while still providing them with lots of winning opportunities thanks to its 95%

Log in and review this game
Share your thoughts with other players
Game reviews
★★★★
Jennifer B
Fun
I enjoyed Demon's Delight very much. I only wish I had more free spins!

Hell’s Bells! The atmosphere at Sin City Saloon is getting hotter! In Demon's Delight, the Pit Boss of Perdition faces off against the chaste but endearing Chip Chaplin underground.The classic three-reel, three-row, and five-line slot game is set against the backdrop of the Sin City Saloon, with Fire and Brimstone swirling around the sulfur-scented slot machines. A subterranean supervisor looks on as players advance toward the many treasures the game has to offer.
Symbols on the reels vary largely in terms of value, including the low paying playing cards that are dressed as the devil, and the medium paying dice, hellcats, and hellhounds. Slightly higher paying symbols include the boneheads and cherries, designed to depict the wrath, disgust, and heat of hell.
Other than these, there are also some special symbols on the reels, including the Bat Out of Hell Expanding Wild, which fills the entire reels with fire and fury to create new winning combinations. This is followed by the Hell’s Bells icon that can trigger the Sin City Shakedown Pit Boss battle round! Here, Chip Chapalin is placed in a Pit Boss Battle for Lucifer’s loot. This involves hitting seven blazing bullet attack symbols in the free spin round, vanquishing the villain and winning an enormous payout of 100x the bet amount. Players must team up with Chapalin to defeat El Diablo and this evil plans by quickly their hands on a few lucky spins!
Overall, Demon’s Delight is a must try if you are looking for some quirky fun with slots! This low volatility slot game has an RTP of around 95%, and a handsome betting range to keep players glued on to their seats and take back sufficient rewards at the same time.