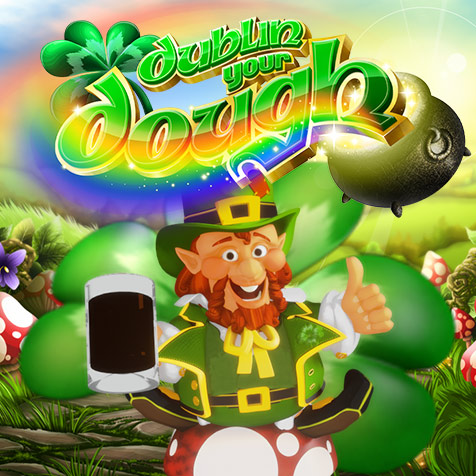 The Betting range on the game is quite convenient, from 0.15 to $75 per spin, giving much leeway and control to players of all pocket sizes. Bets can be set using an interactive dashboard, where players will also find suitable information on pay tables, setting number of coins, number of lines played, and the amount of their bet. It is easy to surmise that the 3-row, 3-reels slot game pays for three of a kind for all symbols alike. You might want to note that Dublin Your Dough can be played for credit alone, though the credit values here are significantly higher than on other slot games. The USP of the game, however, remains its Sticky Wild which pays 600 credits for three of a kind - double the top base symbol. The best part is that this feature triggers frequently giving you plenty of chances to register bigger and bigger wins, without having to chase scatters or play endlessly.

If you are a fan of Irish themed slot games, then Dublin Your Dough is where you should be next. The highly rewarding online slot game from Rival is laced with traditional Irish symbols like leprechauns, clovers, Lucky Charms and pots of gold, making both the visuals and the gameplay far more interesting.the game has a bright green Meadow for its backdrop complete with colorful flowers, mushrooms and bees. this is complemented with a catchy Irish tune playing in the background and several colorful symbols paying out big prizes. The game has not gone very experimentative with its format and sticks to three reels and three paylines. players can easily set the number of coins, number of lines played, and the amount of their bed using the interactive dashboard. they can also set the coin bet value from 0.15 to $75 per spin, which is a quite convenient range.
You would have already understood that the 3-row, 3-reel pays for three of a kind for all symbols alike. Symbols on the reels include mushrooms, clovers, horseshoes, pipes, pints of beer, harps, crosses, rainbows and gold coins. An interesting point to note is that the Dublin Your Dough slot came can be played only for credit, though the credit values here are higher than you will find on most other slot games.
All symbols other than the mushroom will turn a profit on a single spin. This is again a respite compared to other online casinos. The USP of the Rival Gaming slot lies somewhere else, however. This is the Wild feature, represented by the leprechaun, which pays 600 credits for three of a kind, straightaway double the top base symbol. If this Wild is part of a payline, It becomes sticky and instantaneously triggers a multiplier free spin. Expect your world to become anything from a 2X, 3X or 4X multiplier and bringing free spins as awards to players. if you suddenly land another wild during the feature round itself, you are entitled to additional free spins as well.
One of the biggest highlights of the Dublin Your Dough slot game is that players are given plenty of chances to register bigger and bigger wins, without having to chase Scatters or play for long hours to be able to collect money. The game may not soar high in terms of its RTP at 94.84%, and neither has any bonus features like the majority of other slot games. And yet, it makes up for these fallbacks with its exclusive Sticky Wild Re-Spins feature that triggers quite frequently giving players multiple chances to score big.