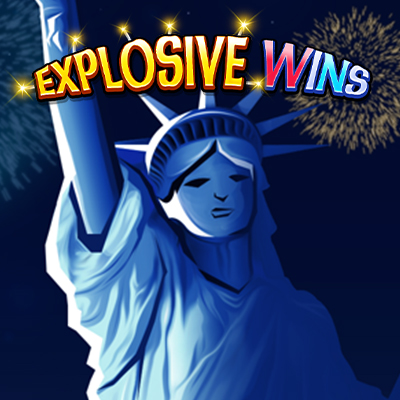 Based on the theme of the American celebrations of 4th July, Explosive Wins has an array of massive wins to offer to players. The game comes in a classic slot format of 3 rows and 3 reels along with modern, highly-rewarding features that keep up with the game’s title.

The symbols on the game reels include both the traditional colorful 7s and bars and the unique Wilds and Bonuses. The American flag is the Wild on the game, besides being its most valuable symbol. It can replace any other symbol on the reel, creating new winning possibilities. Landing 3 Wilds on a single payline rewards players with a massive multiplier of 10,000x their line bet!

The Fireworks bonus comes next and brings in hidden prizes for players. Landing 4 firework bonus symbols in the four corners of the slots trigger the bonus game, where players can click on the symbols and win instant cash prizes. The USP of Explosive Wins is its Progressive Jackpot feature, linking to the Super Slots Jackpot for higher, rarer payouts, and the Mystery Jackpot for the lower, more frequent ones. True to its name, Explosive Wins has a lot lined up for players who are ready to take higher risks.

Are you looking for an online slot game that combines a faster pace, higher rewards, and an entertaining interface, all in one? Well, Explosive Wins by Arrow’s Edge is then the perfect choice for you.

Based on the theme of the American celebrations of 4th July, Explosive Wins follows the classic slot game format of 3 rows and 3 reels. However, it manages to escalate the gaming experience with the help of rewarding modern features such as Wilds, Bonuses, and Progressive Jackpots.

The symbols on the reels are not too diverse and yet make for entertaining gameplay. The lower-paying symbols on the reels include red, blue, and green-colored 7s and single, double and triple bars. Players can register wins on landing any three 7s or any three bars in a single spin. Besides, the game also features the American Flag Wild symbol, which can substitute all other symbols on the reels and create new winning combinations for players. The wild is also the most valuable symbol on the reels. Landing three Wilds anywhere on the slots can reward players with a multiplier of 10,000 times their line bet!

Explosive Wins also features a special Fireworks Bonus. Landing four of these symbols in all four corners of the reels in a single spin assures massive rewards for players. The player can click on the Fireworks bonus symbols to reveal hidden instant cash prizes that augment their total payline wins.

Apart from these exciting features, Explosive Wins boasts of two unique Progressive Jackpots that reward players over and above the 10,000x multiplier. These jackpots can be won on any spin, and are of two types. One is The Super Slots Jackpot, which is rarer and normally hits when it is worth between $40,000 and $45,000. The second The Mystery Jackpot, which appears more frequently and pays out when it is worth anything between $9,000 and $10,000.

Explosive Wins has a base game RTP of 94.55%, which is low when compared to the industry average in online casino gaming. However, if you add the jackpots, the RTP rises to 95.17%, which is closer to the industry average. Explosive Win is a perfect match for those slot gamers who seek massive wins in a fast-paced gaming environment and are ready to make bigger bets for bigger rewards. The game’s HTML5 technology makes it fully compatible with mobile phones, laptops, and desktops alike.