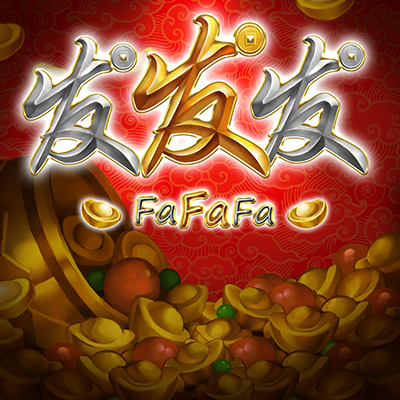 Fa Fa Fa by Qora Games is a slot game classic that is sure to give the extra edge you have been seeking when it comes to experience. This online casino wonder brings the ageless simplicity of old slot machines, with a single horizontal payline across the middle reel in its 3-reel format for the only wins you can make. The slot game Fa Fa Fa has a single character or symbol to play with – the Fa – which is a Mandarin phrase that stands for law or standard. The game can be played both for free and for real cash, depending on what you choose. Anyway, the betting range is between 0.02 to 80.00, which speaks of the enormous convenience that the game has to offer for all pocket sizes.
All the players have to do to register a win is to land three Fa symbols on the single horizontal payline across the central reel. Often, wins get scattered between the lines, leaving no rewards. Landing three symbols of distinct colours also pays you 5 points, though these points rise with colour combinations and is the highest for three identical Fa symbols. With an RTP of 97.1% and a comfortable betting range for all, this is one game you cannot miss.

Classic slots have a special, timeless edge to them, and Fa Fa Fa by Qora Gaming brings this very ageless charisma to our screens with its special gameplay. The simplicity of the game is its real USP, that comes with a single horizontal payline across the middle in this 3-reel online casino format. The only character on the game is a Mandarin phrase ‘Fa’ meaning law or standard.While the game can be played even for real cash, bets start at just 0.02, making Fa Fa Fa a convenient pick for every pocket size. The top bet, however, at 80.0 is sure to attract the big hit lovers as well. Running from left to right, the single payline turns out to be a quite a pain in the neck, as wins tend to fall “between the lines”, taking away your chances for a win.
With just four regular symbols to play – the Fa character in an assortment of colours – the game is quite simple and straightforward for all. Landing three green Fa symbols will pay you 25 coins, while landing three blue Fa symbols will bring 50 coins. On the other hand, three red Fa symbols offer a jackpot prize of 100 coins. Landing three Fa symbols of different colours each brings you 5 points, while landing two identical and one distinct symbol will also bring you some gains. Once you register a win, the Fa symbol will burst into flames immediately, leading to an amazing graphic effect which is the highlight of the game. With an impressive RTP of 97.1% and medium volatility, Fa Fa Fa is the ideal slot game for all types of casino lovers.