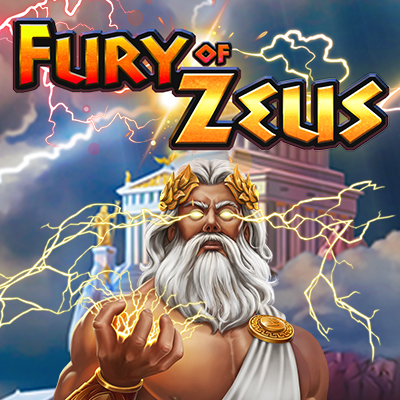 Based on Greek mythology, Fury of Zeus is a 5-reels, 3-rows and 20 paylines online slot game that has the King of Gods, Zeus, as its central symbol. Drawing its characters from the same pages of Greek legends, the game features on its reels royals and godly characters such as Poseidon, Hera, and Hades apart from Zeus. Central to the game’s premise is a deadly combat among these gods, with Zeus unleashing his fury on mankind. Zeus also happens to be the highest paying symbol on the reels, rewarding 2500 credits for 5 of a kind. The Wild in the game can replace any other symbols on the reels except the Scatter and can only appear on reels one and four during the game, while paying itself. The Scatter symbol pays two of a kind and becomes part of winning combinations to unlock the Free Spins feature game.
Players can win 10 free spins and a 2x multiplier each time a Wild appears. The Progressive Jackpot is another interesting feature of the game, rewarding players huge bounties between $10,000 and $20,000. Interestingly enough, the game’s RTP of 95%, its high volatility and wide betting range of 0.02 to 200 make the game fairly rewarding and exciting for those slot lovers who love to chase a little thrill and adrenaline from their favourite slot games.

Zeus, as we all know, is the King of Gods according to Greek mythology. It is the wrath of this God of Gods on mankind that this slot game attempts to explore through the Fury of Zeus. With illustrations, characters and the game premise inspired from the same Greek mythology, the 3-rows, 5-reels slot game makes for an interesting and entertaining gameplay in all. Symbols on the reels include Greek royals and gods Zeus, Poseidon, Hades, and Hera. Zeus is the highest paying symbol on the reels, paying 2500 credits for five of a kind. The game’s features include Wilds, Scatters, Free Spins, as well as Progressive Jackpots. The Wild symbol can appear only on reels one and four and pays itself. It can replace all other symbols on the reels except the Scatter symbol, which pays two of a kind. The scatter can also be part of the winning combination that unlocks a Free Spin.
The Free Spins feature presents itself every time a Wild symbol appears on the reels, giving the player a chance to trigger this feature if they want. This brings them 10 Free Spins and a 2x multiplier for one wild. During the feature game, the Wild can also appear on the fifth reel and bring in 5 additional Free Spins for players.
The best feature of Fury of Zeus is its Progressive Jackpot game, which gets triggered randomly from time to time during the game itself. Although the rewards might come across as low compared to other online casino games, it is very realistic and frequently appearing, at $10,000 to $20,000.
The betting range of 0.02 and 200 on Fury of Zeus makes it the ideal game for every pocket size. The 20 lines game offers 2500 times maximum exposure to the total bet and a doable RTP of 95%. The game is of extreme volatility and offers Auto-Spins and Quick Spins. With adaptive design across desktop, mobile and tablet, and multi-language as well as multi-currency support, Fury of Zeus is one game that you must play for the best online casino experience.