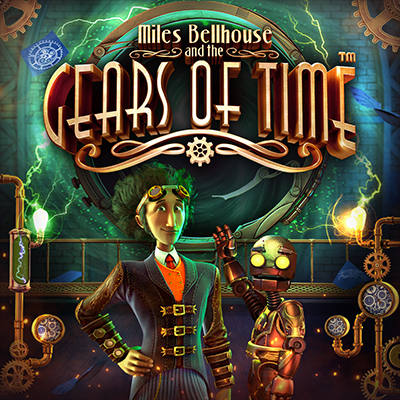 Miles Bellhouse and the Gears of Time by Betsoft is an online video slot game known for its brilliant graphics, animation, and highly rewarding gameplay. Its theme revolves around the eccentric scientist Miles who travels through time with his sidekick robot through the past, present, future, and back again at different ages.The online casino game follows a 5x5 square grid and boasts of features like Bonus Games, Free Spins, Cascading Reels, Clusters of Time, and Time Travel Modifiers. Gears of Time has, for its symbols, aviators, cogs, and wheels in bronze, steel, and gold colors, portals, pocket watches, and images of Miles and Gizmo on the reels.
While the Clusters of Time feature allows players to choose positions on the game to reveal winning clusters, the Time Travel Modifiers offer myriad rewards such as round replays, multipliers on the current bet, and Free Spins and Re-Spins.
The medium volatility slot game comes with a high RTP of 96.98% and a betting range of $0.05 to $0.50, which makes the slot game suitable for both casual and high rollers. Play Gears of Time for its wonderful visual effects – brain waves, blazing lights, colored tubes – and its electrifying soundtrack that keeps the stakes high.

Coming from Betsoft, which is known worldwide for its stunning graphics and animation standards, Miles Bellhouse and the Gears of Time is a distinct online video slot game. The game uses bright colors, fast-paced gameplay, and an electrifying soundtrack to take the entire gaming experience to an all-new level.Gears of Time is based on the sci-fi concept of Time Travel, with an eccentric scientist named Miles and his sidekick robot Gizmo as central characters. They are traveling through time – the past, present, future, and back again – at different ages. The game has a subterranean, Victorian-Gothic warehouse as its backdrop and comes with a square grid of 5x5. Features on the game include Bonus Games, Free Spins, Cascading Reels, Clusters of Time, and various Time Travelling Modifiers.
The symbols on the reels include timepieces, aviator goggles, portals, pocket watches, cogs and wheels in bronze, steel, and gold colors, and images of Miles and Gizmo. The special Cluster Pays System, or Clusters of Time allows players to choose 5 positions in the game area, and as each cascade completes, one of these positions yields a winning cluster. Landing more than one winning cluster in their selected positions triggers the Time Travel Modifiers while landing them on all five selected positions activates the Free Spins round.
Miles Bellhouse and the Gears of Time comprises three potential Time Travel Modifiers – the Past, the Present, and the Future. The Past appears more frequently on the game and offers a replay of the last game round. The Present augments the wins of the current round by anything between 2x to 20x, while the Future triggers a Free Re-Spin after picking a symbol on the reels.
This online video slot game by Betsoft offers a mediocre betting range of $0.05 to $0.50, which makes the game suitable for every pocket size. What sets the game apart is its high RTP of 96.98% despite the medium volatility. Players can win up to 1084x their bet, or $54,240 in cash at the most.
Miles Bellhouse and the Gears of Time stands out because of its interesting graphic and animation features as well. “Brain waves” flash across the screen from time to time, ending up on the reels. Blasts of steam are emitted from bronze-colored tubes, while the backdrop emanates blazing lights. The entertaining gameplay can be enjoyed across mobile phones and desktops alike in multiple languages and currencies.