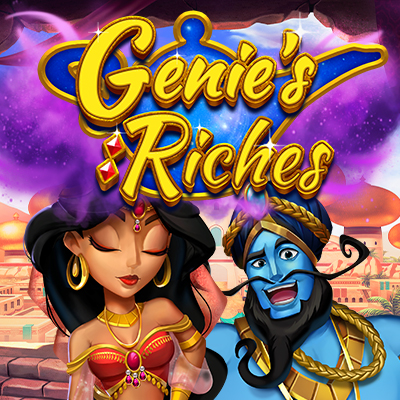 Looking for a genie to grant three of your most prized wishes? What if we offered you more than that? Consider obtaining multipliers based on the genie's gifts, such as free spins, wilds, instant wins, and free spins. With the newest video slot from Dragon Gaming, you may hope for all of this and more!Genie's Riches is a new and exciting video slot with intriguing and amusing elements that have never been seen before. In this romantic Middle Eastern environment, Aladdin is the primary figure. Numerous symbols may appear in the game's 5x3 grid, but magic lamps are what result in huge prizes.
There are two different types of lamps in the game, and each one unlocks a special gaming feature. Landing three or more of the standard lamp symbols, which act as the scatters and can appear anywhere on the reels, will start the free spins round. The next bonus is provided by the golden light icons, which include tapping on six or more lamps to reveal multipliers and instant wins. Six golden lights also trigger the Aladdin's Wish feature, which causes re-spins that keep spinning until no more golden lamps show up in new locations.
The highest-valued symbols in the game are the title Genie, Aladdin, the princess, and the tiger. The playing card symbols A, K, Q, J, 10, and 9 serve as low-value symbols, and Aladdin's magic carpet serves as the Wild, replacing all other symbols aside from the lamps. The game has 50 fixed paylines and a 94% return to player percentage.

What if the genie from the lamp did more than just fulfil three wishes? How about getting to lay your hands on free spins, wilds, instant wins, and multipliers based on the genie’s bounties? With Dragon Gaming’s all-new video slot, this is exactly what you can hope will happen, and much more!Genie’s Riches is a refreshing and fun-filled video slot full of exciting and never before seen features. The game is set in a romantic middle eastern environment with Aladdin as its main character. Although many symbols can appear on the game’s 5x3 grid, magic lamps are the ones paving the way to big prizes.
That’s not all though. There are two types of lamps in the game, both of which lead to one of the special features woven into the gameplay. Regular lamp symbols act as scatters, landing at least three of which anywhere on the reels triggers the free spins round. Next comes the golden lamp symbols awarding multiple features, such as landing six or more lamps to tap and reveal instant wins and multipliers. Six golden lamps will also trigger the Aladdin’s Wish feature, resulting in re-spins that keep spinning until no more golden lamps appear in new positions.
The titular Genie is the game’s highest value symbol, followed by Aladdin, the princess, and the tiger. Low-value symbols are denoted by playing card icons A, K, Q, J, 10, and 9, while Aladdin’s magic carpet represents the Wild, replacing all other symbols except the lamps. The game has 50 fixed paylines and comes with an RTP of 94%.