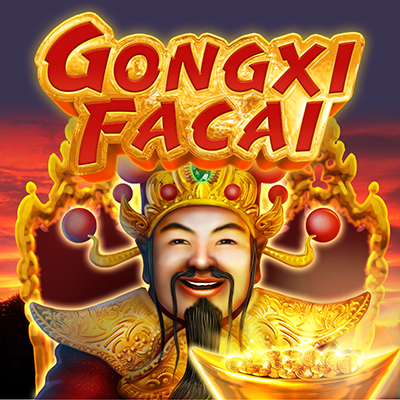 Gong Xi Fa Cai by Qora Gaming is a 3 rows, 5 reels slot based on the theme of the Chinese New Year. Festivities and celebrations reverberate throughout the game both in terms of appearance and rewards, as the game comes packed with features like Scatters, Free Spins, Wilds, Multipliers, and Jackpots! The 243-way online casino game’s name - Gong Xi Fa Cai – literally translates to “Best wishes and greetings, much health and prosperity!”, and lives up to this vibe.The God of Wealth, Cai Shen, welcomes and leads the players to this bountiful haven, which features symbols of tigers, roosters, dogs, and koi fish on its reels, in tandem with the Chinese calendar. Colourful dragons seal in the merriment and pay quite well.
The Chinese letter Scatter leads to Free Spins and thus extra rewards, while the Wild symbol brings in new win possibilities and multipliers. Gong Xi Fa Cai also boasts of four highly rewarding jackpots – Mini, Minor, Major, and Maxi, each with their own bonus amounts and getting triggered at random after spins. Apart from the high volatility and impressive RTP of 96%, Gong Xi Fa Cai by Qora Gaming boasts of the above-mentioned rewarding features, making the gameplay quite exciting for all slot lovers.

Gong Xi Fa Cai slot game by Qora Gaming is a fun-filled 3-rows, 5-reels slot game based on the exciting festivities of the Chinese New Year, which is a magnificent festival of the East. Accompanied by an upbeat soundtrack, the game features compelling illustrations. The 243-way online casino game boasts of highly rewarding game features such as Scatters, Free Spins, Multipliers, and more!Literally translating into “Best wishes and greetings, much health and prosperity!”, Gong Xi Fa Cai brings in the spirit of love, celebration, and goodwill in this video slot game, where Cai Shen, the God of Wealth, guides the players through the base game. Symbols on the reels include tigers, roosters, dogs, and koi fish, along with colourful dragons sealing in the merriment.
On the side of the reels is a special character, seemingly part of the New Year parade, smiling and pointing to the many treasures this game has to offer. The Scatter symbol is denoted by a Chinese letter, whereas the Wild symbol has the word “wild” written across it in Chinese style. Landing three or more Scatters on reels 1, 3, and 5 triggers the Fa Cai Free Spins feature, where players can select from one out of the five Free Spin series, to unlock up to 20 Free Spins and a possible Wilds Multiplier of 30X for huge rewards. The Fa Cai Free Spins can also be retriggered during the game.
The game also presents four jackpot values – Mini, Minor, Major, and Maxi. While each jackpot comes with a fixed bonus amount, it can be triggered at random after regular spins. Gong Xi Fa Cai lives up to its celebratory theme by bringing in huge rewards for players, such as a total of 88 Free Spins during the game. Besides, all the low-paying reel symbols of A, K, Q, J, and 10 disappear during the Free Spins mode, meaning you can expect bountiful rewards in this round. Animal symbols turn into Gold and offer much bigger payouts, such as the Dragon which would pay 550 coins for a combination of 5 during the base game, but 750 during the Free Spins feature.
The high volatility video slot game has an RTP of 96%, which is quite impressive. With an amazing feature line-up and compatibility with multiple devices, platforms, currencies, and languages, Gon Xi Fa Cai is a must-try for every slot lover.