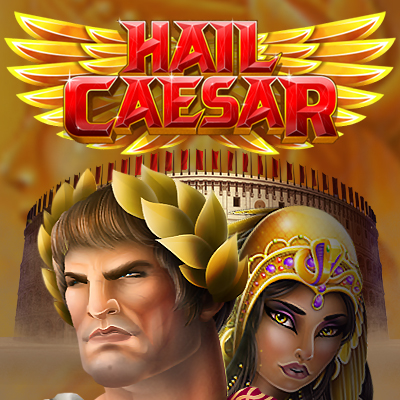 Bringing a unique blend of historical legends and modern-day slot gaming together, Hail Caesar has emperor Julius Caesar and his powerful Roman empire in focus. The game's designers have done a good job representing the mediaeval era. As players spin the reels in the beautiful Roman Colosseum, they are in for an abundance of riches from all corners.The game's theme is closely reflected by the symbols on the reels. A wolf statue, a temple, a bust, a laurel, a helmet, a labrys, a golden eagle, money, a chariot, and a chalice are all included in this collection, along with the interesting Julius Caesar and the lovely Cleopatra. The Caesar Coin serves as the bonus symbol, while the Roman Empire Eagle serves as the scatter symbol.
The 3-row, 5-reel slot machine, however, has more things to offer than just a thematic appearance. In the Roman Triumph Free Spins round, for instance, obtaining 3, 4, or 5 Free Spins scatters awards 10, 15, or 20 Free Spins, each of which includes Sticky Wild Re-Spins.
If players end up landing only two bonus scatters, they may hope to bag the Roman Coin 2nd Chance Feature, which awards them with immediate respins. Players are given opportunity to activate the Ideas of March Pick Bonus while the Scatter symbols are held in position.
The Pick-em bonus pits you against a gang of assassins while also lining your pockets with the most imperial treasure. The player continues to collect money from Roman citizens until they decide on one who has no outstanding debts.
The Hail Caesar slot machine has a very small $0.01 to $2.50 betting range and a 95.4 percent RTP overall. Despite being a low volatility game, Hail Caesar has tonnes to offer in terms of design, idea, feature-rich features, and awards.

Log in and review this game
Share your thoughts with other players
Game reviews
★★★★
Stephanie R
Love it
Best game I've ever played I'll definitely come back for more you'll enjoy it too
★★★★
Adrienne B
Questionable symbols
The game is fun but there are symbols that don't do anything??? It's either a cow or bull and it's not listed on payout info and when you get 3 or more on a payline it does nothing!!! What are these symbols for????
★★★★★
devin s
slot review
i like it

If you enjoy both playing slots and learning about the past, Rival's Hail Caesar is the action-packed adventure you've been looking for. Although the legendary Julius Caesar and his formidable Roman empire require no introduction, the game's nuanced representations of the great mediaeval kingdom are, to put it mildly, glorious and majestic. When players spin the reels at the breathtaking Roman Colosseum, they may expect riches in abundance.The game's theme is heavily reflected in the icons on the reels. Aside from the captivating Julius Caesar and the stunning Cleopatra themselves, these objects also include a wolf statue, temple, bust, laurel, helmet, labrys, golden eagle, currency, chariot, and chalice. The Caesar Coin is the bonus symbol, and the Roman Empire Eagle is the Scatter.
But there's more to enjoy about the 3-row, 5-reel slot machine. Hail Caesar has a tonne of fantastic features. In the Roman Triumph Free Spins round, for instance, landing 3, 4, or 5 Free Spins scatters results in 10, 15, or 20 Free Spins, each of which includes Sticky Wild Re-Spins.
Additionally, the Roman Coin 2nd Chance Feature offers players automatic respins as long as they only land two bonus scatters during the regular game mode and not a third. Players receive an extra spin and a second chance to activate the Ideas of March Pick Bonus while the Scatter symbols are held in position.
Three Caesar Coin bonus Scatter symbols are required to start this special feature round. The Pick-em bonus pits you against a gang of assassins and fills your pockets with the largest imperial treasures. Up until they select a citizen who has nothing to pay, the player keeps collecting money from Romans.
The Hail Caesar slot machine has an overall RTP of 95.4 percent and a rather constrained betting range of $0.01 to $2.50. In this low volatility game, which has a tonne to offer in terms of graphics, concept, feature-packed features, and rewards, payouts are made from left to right.