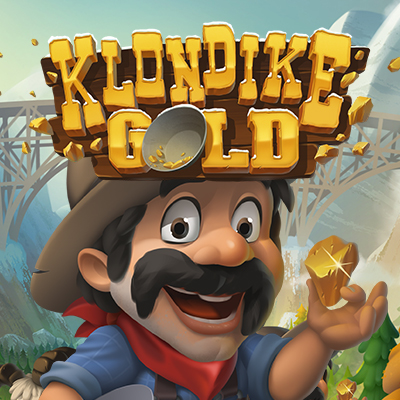 The fantasy slot game Klondike Gold by RivalPowered lives up to its image of gold and wealth by rewarding players with numerous rewards through its engaging gameplay. The slot machine game boasts particularly captivating visuals and audio effects with its five reels, four rows, and 1024 play ways. Conifers, tall hills, freshly snowed-covered summits, and a clean stream can all be observed in the background and foreground, respectively.

In the far-north environment of Klondike, wild animals such as mountain sheep, foxes, falcons, and deer might show up on the reels as mid- to high-paying symbols. Yukon John must be accompanied by players on this fantastical voyage. Yukon John arrived in this region with prospecting tools in order to search for the motherlode of wealth.

The "Strike it Rich" Free Spins and the Yukon John Multiplier Wilds are only two of the numerous lucrative gaming elements. Wild symbols can only appear on reels 2, 3, and 4, and their random multiplier can be 1x, 2x, or 3x. The bonus round's multipliers range from 2x to 3x.

By landing 3, 4, or 5 bonus Scatters anywhere on the reels during a single game, players have the chance to receive 8, 15, or 20 Free Spins during the Strike It Rich Free Spins phase. During the Free Spins feature, the innovative Collect 'N' Win Feature may also occur, enabling the Golden Lynx to upgrade symbols to the highest payout possible!

With an average projected Return to Player of 95.12% and medium volatility, Klondike Gold would initially appear to be a low-to-medium earning slot. If you concentrate on the various opportunities to fill your sack with gold nuggets with each spin and take Yukon John's mission more seriously, you will find yourself cheering for the game more than ever before. Every spin on Klondike Gold has the potential to be a massive win!

Log in and review this game
Share your thoughts with other players
Game reviews
★★★★★
Kathleen B
My review
So fun and pays well.
★★★★
Shannon O
really good quality game alot I really like it
must play pays out alot

Join Yukon John on his treasure quest to the quaint land of Klondike, where the rivers and streams brim with hidden dreams and treasures! The fantasy slot game Klondike Gold by RivalPowered lives up to its depiction of gold and riches by bestowing bountiful prizes on players through its fascinating gameplay.

The five reel, four rows, and 1024 play ways slot game has particularly enticing visuals and sound effects to boast of. The background glistens with fresh snowcapped peaks, with conifers, lofty mounds, and a clear blue stream in the fore. The overall appearance is softened by a golden glow, lending an ethereal softness to the game, kind of like a trance.

Klondike is essentially a wondrous abode set in the far north, teeming with wildlife like mountain sheep, foxes, falcons, and deer, that all make an appearance on the reels in the form of mid to high-paying symbols. In this land has Yukon John set out with prospecting gear to search for the motherlode of riches, and it is him that players must join on a fantastical ride ahead.

The game comes loaded with several high-paying features as well, including the Yukon John Multiplier Wilds and the “Strike it Rich” Free Spins. The Wilds can appear only on reels 2, 3, and 4 with a random multiplier of 1x, 2x, or 3x. In the Bonus Round, the multipliers range between 2x to 3x.

This is the Strike It Rich Free Spins round, where landing 3, 4 or 5 bonus Scatters anywhere on the reels in a single spin rewards players with 8, 15, and 20 Free Spins respectively. In the Free Spins feature, the brand-new Collect ‘N’ Win Feature may also come to life, enabling the Golden Lynx to convert symbols to their highest possible payout!

With an expected Return to Player of an average 95.12%, and medium volatility, Klondike Gold might come across as a low-to-medium paying slot to someone from afar. However, take a look at the plentiful opportunities of filling your sack with gold nuggets with every spin, and relish in Yukon John’s adventure more closely, and you will find yourself rooting for the game more than ever before. Every spin can be a big, big win with Klondike Gold!