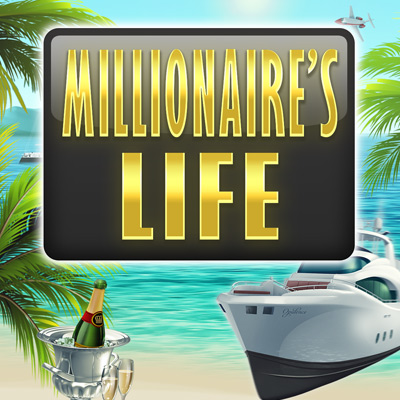 4.7 out of 5 stars.
Log in to rate the game
Developed by Saucify, Millionaire’s Life is an online video slot game with a simple and relaxing beach theme. The backdrop of the 5-reel, 3-row, and 10 payline slots portrays a warm seaside setting, with palm trees around the reels and plenty of prizes for players to take. The minimalistic graphics have been designed with great attention to detail. To add to the soothing gaming experience, a tastefully picked out soft tune plays in the background.

In keeping with the beachy vibe and the name of the slot, the symbols on Millionaire’s Life are yachts, private jets, sports cars, gold bars, diamond rings, dollar bills, watches, and a bottle of Champagne. The most valuable or jackpot symbol out of these is the yacht symbol, which rewards players with 50 times the bet placed when 5 identical symbols land on the screen, 20x for 4, and 5x for 3. The game “Millionaire’s Life” logo is the wild symbol on the game and appears only on the middle (third) reel.

It can replace all other symbols on the reels besides triggering the free spins feature when all reels are covered with wilds. Players can get 4 re-spins where wilds remain locked in place for the entire round. Any wins made during the wild re-spins round get multiplied by x2. However, this feature cannot be re-triggered. Millionaire’s Life can be played across various devices – mobile phones, laptops, and desktops alike. There are only 10 paylines, but players have every opportunity to hit the jackpots.

On Millionaire’s Life, matching 3 or more identical symbols, either from left to right or right to left, results in a payout. Bets can start at $0.10 and go up to a maximum of $25. The low-medium variance game offers a return to player of 95.25%, which is close to the industry average. Players can expect to get frequent wins, but not massive rewards. The highest wins can go up to 50 times the base bet, quite low compared to some other online slot game cashouts.
Log in and review this game
Share your thoughts with other players
Millionaire’s Life is an online video slot game developed by Saucify that is based, as the name suggests, on the high life and many possessions of the rich. With a warm seaside setting as its backdrop, the 5-reel, 3-row game with 10 paylines has plenty of prizes for players to cash in. If you are looking for a game that has a relaxing vibe to it, along with a tasteful design, then Millionaire’s Life is where your search ends.
The game has a beach as its backdrop while a soothing soundtrack plays on as you proceed with the game. The symbols on the reels are all associated with the “high life” – a private jet, yacht, sports car, diamond rings, gold bars, dollar bills, exclusive watches, and a champagne bottle. The yacht is the highest paying symbol, rewarding players 50x the bet they placed if they land 5 identical symbols in a winning line, 20x for 4, and 5x for 3.
Besides, the game’s logo acts as the Wild symbol and can replace every other symbol on the game to form new winning combinations. The logo can also trigger the Free Spins feature when all reels get covered with wilds and all wins during the round get doubled. Players can get 4 re-spins where wilds remain locked in place for the entire round. The wild symbol appears only in the middle, which is 3rd reel. The limit of 10 paylines does not restrict players from hitting big jackpots, so it doesn’t hurt much.
Millionaire’s Life is one game you can play across any device you want – mobile phones, laptops, and desktops alike – on the browser. Payouts are both from left to right and right to left and need at least 3 identical symbols in a single line. With an RTP of 95.25%, this game offers low to medium variance and a betting range from $0.10 to $25.