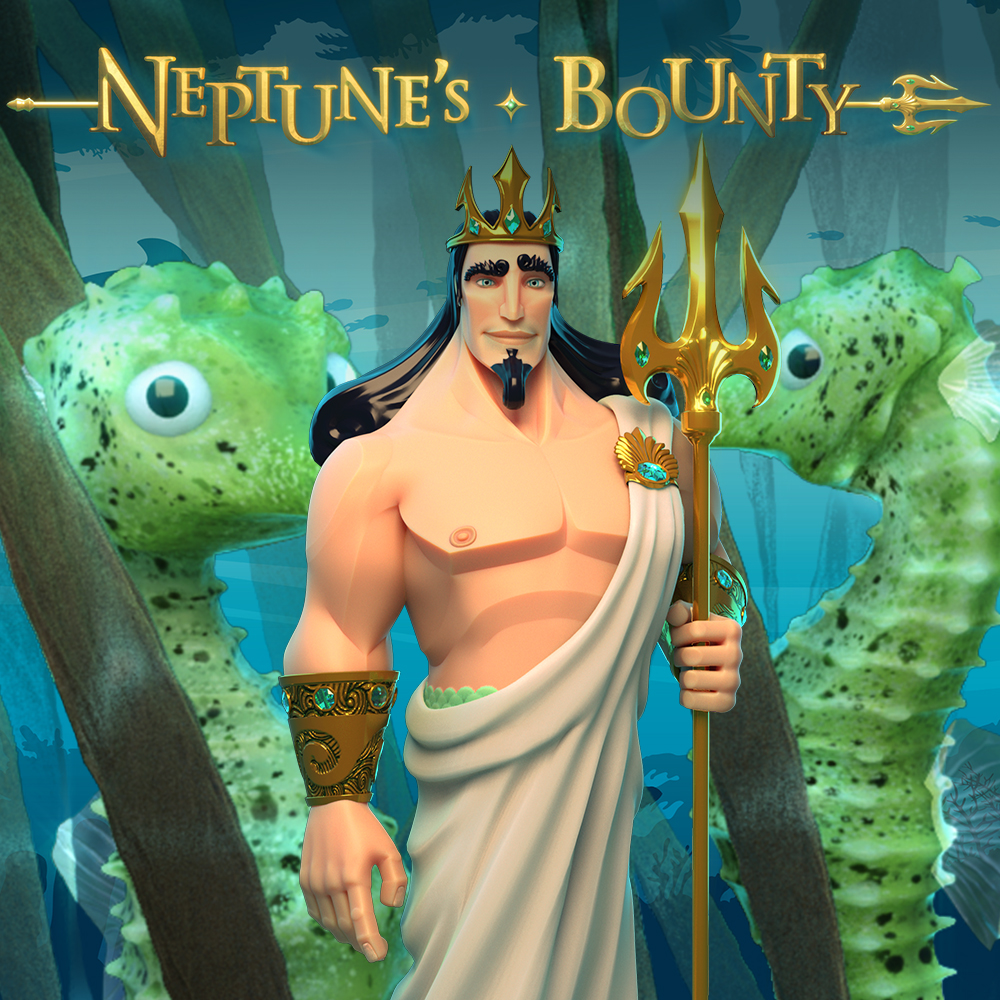 DuckyLuck online casino invites you to join the mythological Roman god of the sea, and wonder at his magical underwater kingdom while you play to win a rich bounty for yourself. Neptune’s Bounty is delightfully tranquil, but don’t be fooled ¬– there’s a lot to play for in this ocean paradise.Neptune’s Bounty has a five-reel, three-line configuration with 15 fixed paylines. Beautiful graphics bring this video slot to life, featuring symbols such as a pearl in an oyster, a jellyfish, a conch shell, Neptune’s trident, dolphins and seahorses. Even the playing card symbols are special, depicted as delicate corals. All of the various symbols are delightfully animated when forming part of a winning combination.
The Wild symbol is mighty Neptune himself and can appear over a single space or double up vertically to make many more winning combos. Neptune’s Palace is the Free Spins scatter symbol, awarding up to 22 free spins when 5 scatters are landed.
Another scatter symbol is the Neptune’s Bounty clamshell. Three of these appearing on the reels trigger the special Bonus Game, which allows you to choose between Neptune’s Throne Room or Kraken’s Cavern. Once there you get to click on three clams or sea chests of your choice, respectively, which reveal your winning amount for each. This feature can yield some really great rewards!
A relaxing, gentle soundtrack and quirky sea creature sound effects make Neptune’s Bounty quietly pleasant entertainment, while still offering the thrill of spinning and winning at every turn.

DuckyLuck online casino is thrilled to offer our players another great slot from Saucify, one of our consistently innovative game providers. Neptune’s Bounty is a five-reel, 3-line video slot bringing the undersea world to life, with symbols such as Neptune’s golden trident, dolphins, a pearl in an oyster, a jellyfish, a conch shell and seahorses. The playing card symbols have each been rendered as delicate corals. We love the beautiful graphics and animations that really show off the wonders of the life beneath the sea.Neptune’s Bounty is brimming with winning features. Neptune, the mighty mythological god of the sea, is the Wild symbol, often appearing as a double high Wild, with double the impact of forming winning combinations across the game’s 15 fixed paylines. Win up to 22 free spins when landing three or more Neptune’s Palace Free Spins symbols. The highest value that can be won in this slot is an impressive 14,240 coins!
The highlight of Neptune’s Bounty is the Bonus Game feature, which is activated by three or more Neptune’s Bounty clamshells landing on the reels. When this happens, the player is offered a choice of two bonus game options: do you enter mighty Neptune’s Throne Room or take the risk of going into the fearsome Kraken’s Cavern?  Both games involve picking three objects giant clames in the Throne Room or sea chests in Kraken’s Cavern. The player chooses and clicks to reveal the value of each, which can be a very tidy sum!
Ultimately, Neptune’s Bounty gets full marks for its superb graphics and special features that make it a pleasure to play.