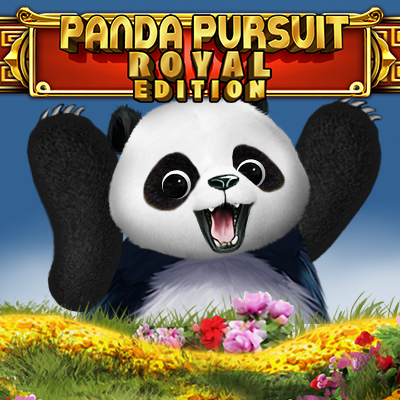 The all-new Panda Pursuit: Royal Edition is a royal makeover of the popular classic of the same name, and has been introduced by Qora Games as its latest rendezvous with the world of online casino gaming. The game comes in a traditional format of 4-rows, 5-reels, and 1024-paylines, but what is not conventional is the feature of floating reels – symbols on the game are not confined to rigid lines, boxes, or grids, but appear to be floating on screen. With bigger win potentials and better visuals, this slot game comes packed with an array of exciting rewards and features, including the Wilds, Free Spins and Multipliers. Landing 3, 4, or 5 Scatters brings you 8, 15, and 20 Free Spins respectively, with an unlimited number of re-triggers to keep you going! Wilds can substitute regular symbols to create new winning possibilities, while Multipliers can enhance your wins by up to 64 times.
The Panda Pursuit slot game has an RTP of 97.25%, which is far impressive and above the industry average. The medium volatility slot game can be played both for free and real money, so it has quickly emerged as a top choice among all kinds of slot game lovers alike!

The popular classic title of Panda Pursuit gets an all new, royal twist in the form of this slot game which features a traditional 4-rows, 5-reels, and 1024-paylines format. The game boasts of an array of exciting and highly rewarding features, with bigger win potentials for every spin that the player witnesses. Truly, your search for bigger slot game prizes ends with the Panda Pursuit. Featuring a map in the background with an X marking the spot to start the game at, one of the most interesting highlights of the game is its floating reels feature. The symbols on the reels are not confined to grids, lines, or boxes like other online casino games, and take a unique turn instead with free floating symbols on the screen. This adds a refreshing twist to the visuals as well as gameplay, as we head into the heart of China.
The backdrop features lush green trees and distinctive Chinese architecture in the scenic backdrop, while the foreground has massive rocky outcrops on display. A cute little panda is seating on one such rocky projection, and sighs happily throughout the gameplay. The lifelike animation of the game makes everything seem even more realistic and entertaining throughout.
The Wild symbol on the reel is in the form of a flower with the word “wild” written across, while the Scatter is in the form of a scroll map with the word ‘bonus’ written across in red and gold. Other symbols on the reels include the low paying playing card icons of A, K, Q, J, 10, and 9, besides animal symbols of the panda, monkey, turtle, and fish. The Scatter is the most valuable symbol, followed by the panda.
The gameplay is simple and straightforward, as you use the symbols to create new winning combinations. There are also some tempting features like Free Spins and Multipliers to grab from time to time, such as 64x rewards on your stake by using a Wilds Multiplier. The Wild symbol itself can replace other regular symbols, other than the scatter, to create new winning combinations. Landing 3, 4, or 5 Scatter symbols during a single spin will earn you a whopping 8, 15, and 20 Free Spins respectively. It is during this feature that the appearance of a Wild may get animated instantly and reveal a hidden multiplier worth 2x to 4x. With an estimated RTP of 97.25%, this medium volatility slot game is truly a haven of rewards galore.