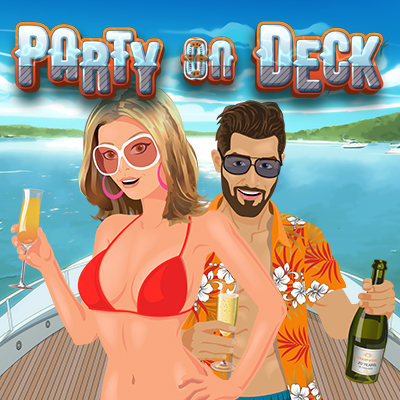 Based on the unique theme of an offshore party on a yacht in azure blue waters, Party on Deck by Saucify is a highly-rewarding video slot game. The slot comes in the traditional 5-reels format with 25 paylines and an array of exciting features.

The reel symbols keep up with the vibe of the game’s boat-party theme and include a helicopter, a bikini-clad girl, the party host holding drinks, a hot-water tub, colorful cocktails, a yellow bikini, glasses, and a champagne bottle in an ice bucket. Party on Deck also features low-paying playing card icons of A, K, Q, and J designed in keeping with the game’s party theme.

The video slot game has some unique feature symbols as well, such as the sailing yacht Wild, which when appearing on reels 2 and 4 transforms into an Expanding Wild, and can cover all remaining symbols on the reels. The Scatter symbol of the ship’s wheel brings in both free spins and a bonus feature game for additional rewards. With an RTP of 95.57%, Party on Deck is a highly-rewarding and beautifully designed online casino game that allows players to win up to 30,825 coins, 29 free spins, and 10x multipliers.

Party on Deck is an entertaining, brilliantly-designed video slot game by Saucify that comes with a traditional 5-reels format. The 25 paylines slot game is based on the interesting theme of a huge party on a yacht in azure blue ocean waters, which has the crew and guests joining you in for an amazing experience.

The symbols on the slot game’s reels keep up with the vibe and theme of the game in terms of their design as well as theme. The high-paying symbols include a helicopter, a bikini-clad girl, the party’s host holding a champagne bottle and glasses in his hands, and a hot water tub. The medium-paying symbols span colorful cocktails, an ice bucket with a bottle of champagne and glasses alongside, and a yellow bikini top.

The helicopter is the highest-paying out of all the symbols. There are also playing card symbols that are among the lowest-paying on the reels. These include the symbols A, K, Q, and J which are all designed to resemble shimmery party lights and décor.

Apart from these symbols, Party on Deck also features special icons that trigger additional features. The first is the Wild symbol, in the form of a yacht in the waters with people partying on its deck. Wild symbols that appear on the 2nd or 4th reels turn into Expanding Wilds and can cover the remaining positions on the reels, thus creating new winning possibilities. The wild symbol can substitute any other symbol on the reels, except the Scatter.

The Scatter is in the shape of the ship’s wheel, which rewards players with Free Spins. Upon landing 3 or more Scatter symbols anywhere on the reels, players enter the Ship’s Wheel feature game where they can spin the wheel to unlock additional rewards. These could either be extra Free Spins or a Free Spins Multiplier that augments all their winnings. Free spins are activated immediately after the feature game.

Party on Deck is a high-paying slot game where players can bag up to 30,825 coins and 10x multipliers for their winnings. They can also win up to 29 free spins during the game. All wins pay from left to right, except the Scatter, which pays any. All payline wins get multiplied by the total credits wagered per line. Scatters are paid in addition to these payline wins. With an average RTP of 95.57%, Party on Deck makes for a highly rewarding gaming experience.