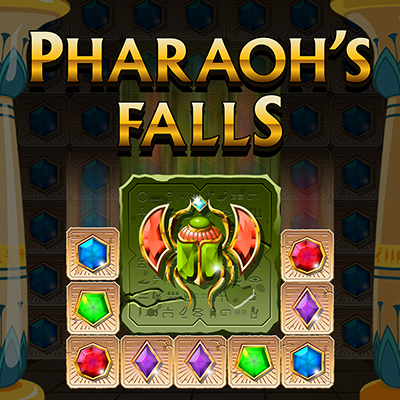 The Pharaoh's Falls slot machine from Saucify has an Egyptian theme. Players are drawn to Egypt's wealth, and the Pharaoh's Falls slot machine not only has a stunning appearance but also offers the chance to win significant cash prizes.This game allows you to carefully construct your winning strategy because it uses 25 moveable pay lines on a typical 5x3 grid. The stake multiplier grows from x1 to x5 with each succeeding victory. There are waves of success. The icons in the game include the Free Falls star, Wild, and Scatter as well as precious stones and stylized card symbols.
The game features a Cascade Wins feature each time a winning symbol combination occurs on an active payline. As winning symbols are removed from the reels and replaced by new ones, further wins are available. Cascade wins continue up until there are no more successful symbol combinations.
A Cascade Multiplier feature is also available, which raises the win multiplier by one step for each winning cascade. The multiplier is applied to the next cascade result. Once it has been reached, all succeeding wins are multiplied by the maximum amount until no more winning symbol combinations are created. The multiplier then reverses to its starting position.
Another unique feature that keeps track of the number of Free Falls achieved when it is activated simultaneously with earlier wins is the Free Falls Star. The Free Falls feature will begin after the Cascade event concludes and there are no more winning symbol combinations. The Wild symbol can take the place of any other symbol, save the Scatter symbols.
When three or more Free Falls scatter symbols appear anywhere on the reels, Free Falls is triggered. Free Falls cannot be activated once more while it is running. The same bets and wager lines as in the game that launched Free Falls were employed.

Ancient Egypt is the focus of the Pharaoh's Falls slot machine from Saucify. Players are drawn to Egypt by its wealth, and the Pharaoh's Falls slot machine not only has a stunning design but also offers the chance to win substantial sums of money. With 25 movable pay lines on a traditional 5x3 grid, the game allows you to carefully create your winning strategies. The stake multiplier rises from x1 to x5 with each cascading win. Winnings happen in waves. Precious stones, stylized card symbols, and three unique symbols—the Free Falls star, Wild, and Scatter—serve as the game's symbols.
The game offers a Cascade Wins feature every time there is a winning symbol combination on a valid payline. Winning symbols are removed from the reels to be replaced by new ones, giving the opportunity for more wins. Cascade wins continue until no winning symbol combinations are made.
There is also a Cascade Multiplier feature, with each winning cascade increasing the win multiplier by one step. The multiplier is applied to the next cascade result. When the maximum multiplier is reached, all subsequent wins are paid at that maximum multiplier, until no winning symbol combinations are made. The multiplier then revers to its initial value.
Another interesting feature is the Free Falls Star, which when triggered at the same time as other wins, the number of Free Falls awarded is held in the Free Falls Star. The Free Falls feature will trigger when no new winning symbol combinations are made, and the cascade event ends. The Wild symbol substitutes any symbol except the Scatter symbols.
Landing three or more Free Falls scatter symbols anywhere on the reels activate Free Falls. Free Falls cannot be activated again during the Free Falls. All bets and lines played are the same as the game that triggered Free Falls.