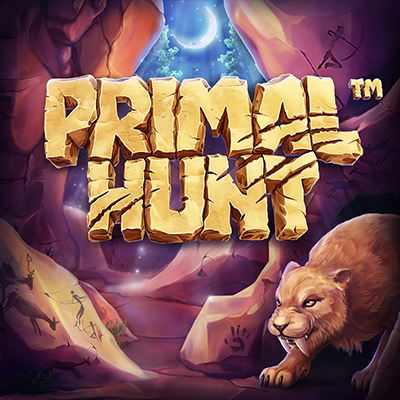 Primal Hunt by Betsoft is an online casino game based on the theme of the ancient Stone Age. With 4 rows, 5 reels, and 80 paylines, this slot game comes packed with exciting features such as Scatter symbols, Free Spins, Expanding Symbols, Wilds, Multipliers, and more. The online casino game can be played both for free and for real money. At its center is a saber-tooth tiger, which is the Scatter symbol of the game and rewards players with 8x, 16x, or 19x on their bet and 8, 12, and 20 free spins respectively for landing 3, 4, and 5 of its symbols on the reels. The cave lion is the Wild and can replace all other symbols on the reels except the Scatter. The wild symbols appear stacked, which adds to the number and rewards attached with these symbols on the reels.
With a handsome betting range of $0.10 and $20, Primal Hunt fits every pocket size. The highest payouts can go up to 4420x the stake of $88,406 in cash, despite being a medium volatility game. Primal Hunt also has an impressive RTP of 96.10%, which means it is an entertaining and rewarding slot game, with instant payouts, unmatched graphics, and sound effects.

Presented by Betsoft, Primal Hunt is a unique 4-rows, 5-reels, and 80 paylines online video slot game based on the theme of the ancient Stone Age. The game draws inspiration from the cave life, natural history, and implements of the era, and comes with exciting features such as Scatters, Free Spins, Expanding Symbols, Wilds, Multipliers, and more. Coming from Betsoft, one can expect high standards of graphics and animation from this slot game, which can be played both for free and with actual money. The central character in the story is a fearsome saber-tooth tiger, while other symbols include crude weapons, cave art representing horses, antelopes, mammoths and bison figures, and crude royals etched out of stone and tied with rope.
A huge cave lion is the Wild in Primal Hunt and can substitute every other symbol on the reels except the Scatter. The wilds appear stacked on the reels, which means that an entire reel could be filled with wilds, leading to an enormous prize. This goes the same for other symbols on the reels, which could also appear stacked from time to time.
The saber-tooth tiger is the Scatter symbol, which makes for one of the most rewarding symbols on the reels. landing 3, 4, or 5 Scatters anywhere on the reels rewards players with 8x, 16x, and 96x on their bet respectively, along with 8, 12, and 20 free spins. If you land three or more Scatters on the reels again during the same active feature, the Free Spins can be re-triggered. These Free Spins come with multipliers of 2x or 3x attached to them, which can add greater prizes to your wins instantly.
With a betting range between $0.10 and $20, Primal Hunt suits every pocket size, making the game perfect for both casual players and high-rollers. Players can easily change bet sizes and other stake settings on the bottom of the screen. The payout range is impressive for a medium volatility game such as Primal Hunt, going up to 4420x the bet, or $88,406 in cash.
Primal Hunt comes with an RTP of 96.10%, which is above the industry average, along with state-of-the-art graphics and sound effects and instant scatter payouts. All these and other features make this online casino game both entertaining and highly rewarding gameplay for players of all pocket sizes. The game works perfectly well across different devices and operating systems and supports multiple languages and currencies seamlessly.