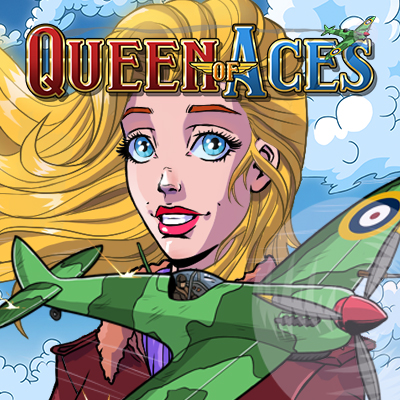 Set in the 1940s, Queen of Aces is a brand-new video slot by Saucify that has at its center allied ace fighter pilots Elizabeth Earhart and Mary Goodrich braving the aerial WWII battles. While the skilled squadron of female aces fly sorties to defend allied territory, supporting “our boys on the ground”, the game is themed on the wartime glory and camaraderie of an all-female fighter squadron. Symbols on the reels include the lower paying playing card icons A, K, Q, J, and 10, each given a distinct military-inspired look. Other middle to high paying reel symbols includes a medical kit, an air mine, a zeppelin, bombers, and a spitfire. The game also features some special symbols such as the Wilds, Feature symbol, the Scatter, and Extra Spins symbol.
Landing 3 or more of the Feature symbols, depicted by a medal logo, anywhere on the reels in a single spin triggers the ‘Pick on Reels’ feature that awards one of the three Free Spins feature games. There are two Wilds in the game, each depicting the two wartime sheroes that the game celebrates. The Wilds substitute any symbol except the Scatter and Feature symbols when it appears on the reels. Any win with the Wild symbol trebles your wins. The Expanding Wilds can take up the entire reel to increase your chances of bagging bigger treasures.
There is also an Extra Spins symbol that resembles the Feature icon. Landing the Extra Spins symbol adds three additional Free Spins to your feature session. Remember that this symbol only appears in Dog Fight and Formation feature games.
With a max win of up to 19,200 coins, 3 unique Free Spin feature games, and up to 15 Free Spins, Queen of Aces makes for both an entertaining and rewarding game in one.

Elizabeth Earhart and Mary Goodrich, two allied ace fighter pilots, battle it out in the 1940s in Queen of Aces, a brand-new video slot from Saucify. The game is based on the grandeur and camaraderie of an all-female fighter squadron during World War II as the trained squadron of female aces fly sorties to defend ally territory, helping "our troops on the ground." The lesser paying playing card icons A, K, Q, J, and 10, each with a distinctive military-inspired appearance, are included as symbols on the reels. The medical bag, an air mine, a zeppelin, bombers, and a spitfire are among the other medium- to high-paying reel symbols. Additionally, the game includes various unique symbols, including Wilds, Feature symbols, Scatters, and Extra Spins.
The "Pick on Reels" feature, which awards one of the three Free Spins feature games, is activated by landing three or more of the feature symbols, represented by a medal emblem, anywhere on the reels in a single spin. The game features two Wilds, each of which features one of the two military heroes the game honours. When they appear on the reels, the Wilds can be used in place of any symbol other than the Scatter and Feature symbols. The Wild symbol triples your winnings on any win. Your odds of finding larger loot rise when the Expanding Wilds cover the entire reel.
Additionally, there is a symbol for extra spins that resembles the feature icon. Three additional Free Spins are added to your feature session if you land the Extra Spins symbol. Keep in mind that this symbol only occurs in the feature games Dog Fight and Formation.
Queen of Aces is a fun and lucrative game in one with a maximum prize of up to 19,200 coins, 3 special Free Spin feature games, and up to 15 Free Spins.