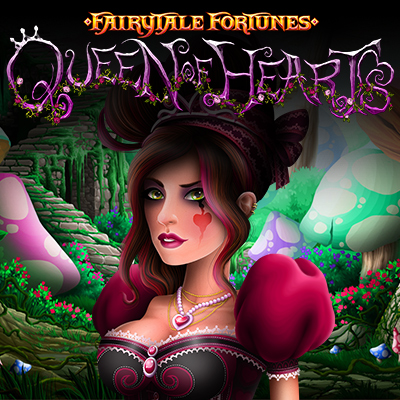 Inspired from the timeless magical classic, Alice in Wonderland, Queen of Hearts is a 4-rows, 6-reels slot game by Rival Gaming that lives up to all expectations. With a brilliant visual display of symbols that vibe perfectly well with the theme and backdrops that change as players are led from one destination to another, Queen of Hearts truly redefines the experience and fun of online casino gaming like never before.Symbols on the reels, fashioned just like you would imagine fairy tale characters to be, including the Queen of Hearts, Alice, the White Rabbit, the Mad March Hare and the Mad Hatter, along with the Dormouse, Absalom, the Caterpillar, the Sneaky Knave and others. The Cheshire Cat is an Expanding Wild, landing huge wins for players whenever it smiles and covers adjacent reels.
Special features of the game include the Rabbit Hole Free Spins round, where players can win 2x, 3x and 5x multipliers for all their wins. The Sneaky Knave symbol activates the Steal a Tart feature, taking players to the majestic tart chamber of the Queen of Hearts. With its RTP expected to be around 95.3% and medium-ranging coin sizes, Queen of Hearts is for anyone who wants to balance risks and rewards with a fantastic gaming experience overall.

With a fantastical premise inspired by our age-old fairy tales, Queen of Hearts by Rival Gaming is a 6-reels slot game inspired by the timeless classic story of Alice in Wonderland. Players are led into a world of fantasy into a colourful forest filled with flowers and fungi right down the rabbit hole, and end up reaching the wonderful Tart Chamber of the Queen of Hearts.With 4096-win lines, the Queen of Hearts slot game boasts an array of weird and eccentric characters. Apart from the Queen of Hearts herself, the slots feature Alice, the White Rabbit, the Mad March Hare and the Mad Hatter. Also on display as quirky symbol displays are the Dormouse, Absalom, the Caterpillar and the Queen’s Card Guards. The Cheshire Cat is the special Wild symbol on the reels, with a single smile enough to bring in huge rewards for players.
The Rabbit Hole Free Spins round gives out multipliers of 2x, 3x and 5x whenever the Wild symbol appears on the reels during the feature. Adding to all the fun is the Sneaky Knave symbol, landing three or more of which sneaks players into the Queen’s secret Tart Hall laden with magical delicacies. It is here that the exclusive Sneak a Tart game gets activated and brings in more surprises for players along the way.
In many ways, the Queen of Hearts is very similar to the classic fairy tale of Alice in Wonderland, with all the adventure starting the moment you chase the White Rabbit down its hole and enter the Wonderland of Winnings. With a near-average Return to Player of 95.3%, the game offers coin sizes of 0.01, 0.05, 0.10 and 0.25 in all. From 1 to 10 coins can be wagered per line, and the overall range of the game is not too volatile, meaning players of all pocket sizes will find it suitable to their taste.
The graphics and visual design of the game, hands down, is the best thing about it. Symbols are adorned to fashion the fantastical Wonderland, while the characters on the reels are laced with quirky details. The background displays haphazardly falling household items and furniture when players are falling down the rabbit hole, arrays of vibrant flowers and toadstools when they have entered the forest, and a majestic chamber with armed guards when relishing in the magical tarts!