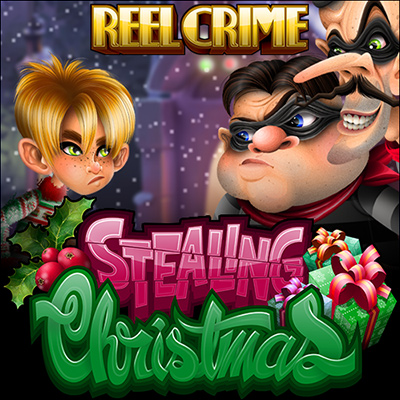 True to its consistency in providing interesting and highly rewarding gameplays, Rival Gaming is here with yet another twisted slot game – Reel Crime Stealing Christmas – featuring two of its universe’s bungling bandits – Remy and Raoul. The duo has teamed up to loot the Richmore mansion but is soon to be left frustrated and defeated because of the mansion’s sole tenant.Players begin the game with just three mansion floors, but that changes to four when they land three or more Scatters and enter the “Protect the House” round, and to five when they land another three Scatters, triggering the “Penthouse Mayhem” round. From the first to the third gameplay, the number of win-lines also progressively increases from 243 to 1024 to 3125.
Apart from the Remy-Raoul duo who represent the Scatter symbol on the reels, other symbols are the crowbar, blow torch, blueprints, van, loot case, getaway tickets, Christmas tree, snowman, and wreath. The Wild symbol is Rival Gaming’s “left-behind child” symbol. While the game may not be very highly rewarding and offers a below-average RTP of 95.43%, its several features like free spins, drop icons, 3x and 9x wild multipliers, and expanding reels more than make up for it, making the game suitable for every pocket size and every slot lover alike.

Rival Gaming’s all-new slot game release in the form of Reel Crime Stealing Christmas is already set to be a fan favourite, thanks to its one-of-a-kind gameplay and unique theme. The game brings together two of the most loved characters of the Rival Gaming universe – Remy and Raoul – as the diabolical duo preparing to break into the lofty Richmore Mansion and empty it of its riches. However, they are not alone, and the home’s sole tenant remains behind to foil their plans and frustrate the felonious friends.The vivid and entertaining five-reel slot game begins with just three floors, where players are offered the regular 243 ways to win. However, as soon you land three Scatter symbols during this regular play round, the blinds to the fourth floor open up, and the special Protect the House round gets triggered automatically, where players get 1024-win lines. Upon landing three Scatters again in this round, it will open up the fifth-floor blinds to the Penthouse Mayhem round, offering 3125 ways to win.
Apart from the bumbling burglars Remy and Raoul, who together constitute the Scatter icon of the game, Reel Crime Stealing Christmas also features the tactical tools they will need for a treacherous trespass, such as a crowbar, a blow torch, blueprints of the mansion, the villain’s van, a loot case suitcase, and get away tickets. Festive season-inspired symbols such as a Christmas tree, a wreath and a snowman also do the rounds from time to time.
The Wild symbol on the game is the “left behind” child from the Rival Gaming universe itself. An exclusive feature of the game is that of the Drop Icons, with new symbols dropping from above and replacing a winning combination to create new winning possibilities. Landing three or more Scatters automatically triggers the Free Spins bonus round as well, where players can garner even more rewards. There are also special 3x and 9x Wild Multipliers to augment your winnings now and then.
While it might seem that Reel Crime Stealing Christmas is not very highly rewarding as far as prizes and number of features are concerned, the five Expanding Wild reels and a Wild Child on the loose more than make up for it. With a near-average RTP of 95.43% and a lower-end betting range, Reel Crime Stealing Christmas can turn out to be a lowkey interesting slot game to experiment with this festive season!