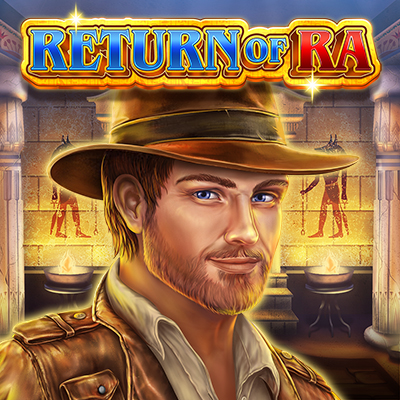 Return of Ra by Saucify Games draws inspiration from the legendary Egyptian tales of yore, featuring pharaohs and their majestic but mysterious pyramids. Players are led into a world of mysteries, laded with riches and treasures that they are left to explore and grab all the way through. In the backdrop is a majestic pillared hall, while the symbols up for display speak of the grandeur and vibrance of Egyptian culture.Reel symbols on Return of Ra include low-paying playing symbols of A, K, Q, J and 10, while there are other medium-to-high paying symbols such as the Scarab, a Woman, an Explorer and Tutankhamun to land on the reels. Interestingly, each of these symbols displays a dual character, and appears in both regular and special versions of itself, the latter one bringing in greater rewards.
The Wild symbol shows a similar duality, with the regular version able to replace all other symbols on the reels to form new winning combinations, but the special version unable to. Besides, landing three, four or five Wild symbols anywhere on the reels triggers the Free Spins bonus round where any visible special symbols can cover the entire reel during the Free Spins round, bringing in more rewards.

Based on the widely popular “book” games, Return of Ra borrows from the Egyptian legends of pharaohs and pyramids, as it takes the players deep into the hidden riches and mysteries they had never explored. The hot new slot game has three rows and five reels, with a majestic pillared hall for its backdrop.A majority of the symbols on the Return of Ra reels are low-paying playing card icons of A, K, Q, J and 10, which also appear the most frequently. Other than these, there is the Scarab, a beautiful Egyptian woman, an Explorer, and Tutankhamun. Each of these symbols, including the playing card deck, appears in two forms – regular and special – the latter offering greater rewards upon landing on the reels.
The same goes for the Wild symbol, which substitutes all symbols in their regular form, but not for the selected special symbol in its special form. Wilds can also trigger the Free Spins bonus upon landing in combinations of 3, 4 or 5. During Free Spins, any visible special symbols expand to fill the reel. Offering up 27,500x coin wins and the special feature of BOOK symbol selection, Return of Ra offers just the perfect balance between rewards and fun.