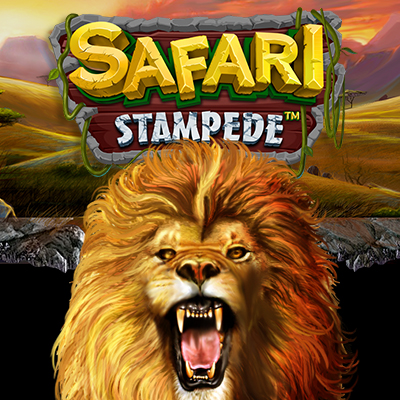 Safari Stampede by Qora Games draws from the rich diversity and natural beauty of the Great African Plains. The 3-rows, 5-reels format online slot game comes with 10 fixed paylines and features brilliant illustrations, detailed graphics, a relaxing Afro soundtrack and interesting sound effects that escalate the gaming experience even further.Symbols on the reels of Stampede Safari include Hearts, Diamonds, Clubs and Spades, which are all lesser paying symbols compared to the animal icons of the Elephant, Rhino, Gorilla and Eagle. The Lion is the Wild symbol on the reels which can uncover an entire set of rewards for players from time to time.
Besides paying out on its own, the Wild can expand to cover the entire reel, act as a Walking Wild to unlock re-spins, award Multipliers to wins of which it is a part, and replace all other regular symbols to create new winning possibilities. The pink crystal Scatter, on the other hand, can activate Free Spins as well as cash rewards. Safari Stampede boasts of an impressive RTP of 96.12% besides a comfortable betting range of 0.10 to 90.00, which means players of all pocket sizes can enjoy this game equally.

Inspired by the beauty and diversity of African wildlife and culture, Safari Stampede takes players on an exciting trail through the forest where they come across lions, rhinos, elephants, eagles and gorillas. The lavishly illustrated game boasts brilliantly detailed graphics, an engaging Afro soundtrack and exciting sound effects, perfectly capturing the African Safari vibe.The game comes with ten fixed paylines so the coin value is applied to each one. The 3-row, 5-reel slot game from Qora Games has playing card symbols of Hearts, Spades, Clubs and Diamonds as the low paying symbols on its reels. Other than these, the elephant, rhino, gorilla and eagle also make appearances from time to time.
The lion is the Wild symbol in the game, which can expand to become a Stacked Wild Reel wherever it lands. The Wild also awards Multipliers to the wins in which it features, starting from 1x and going up to 5x on reel 5. The lion Wild also pays on its own; landing 3, 4 or 5 Wild symbols simultaneously on the reels pays 30, 100 and 300 coins respectively. It can substitute all other symbols on the reels, except the Bonus, to form new winning combinations.
The Expanding Wild Reel also offers one or more Free Re-Spins whenever it lands, enabling it to “walk” to the right of the reels and disappear off the end. Therefore, when this Walking Wild Reel appears on the first reel, players are awarded 4 re-spins, while a Walking Wild Reel on the last reel would generate just a single re-spin.
Scatter symbols in the game are represented by pink crystals which bring more Free Spins and plenty of cash awards whenever players land at least three of them on the reels. Free Spins can be retriggered, with a cap of 12 Free Spins. The betting range of the game is also quite convenient for players of all pocket sizes, running from 0.10 to 90.00 per spin. Low risk-takers would still better be cautious because Safari Stampede is indeed a high volatility game with too much at stake.
The RTP of the game, at 96.12%, is quite respectable in terms of the industry average, and so are its rewards for players. The overall theme of the game, however, is what lasts with the player. The reflection of the Great African plains accompanied by a rhythm-filled soundtrack is truly mesmerizing.