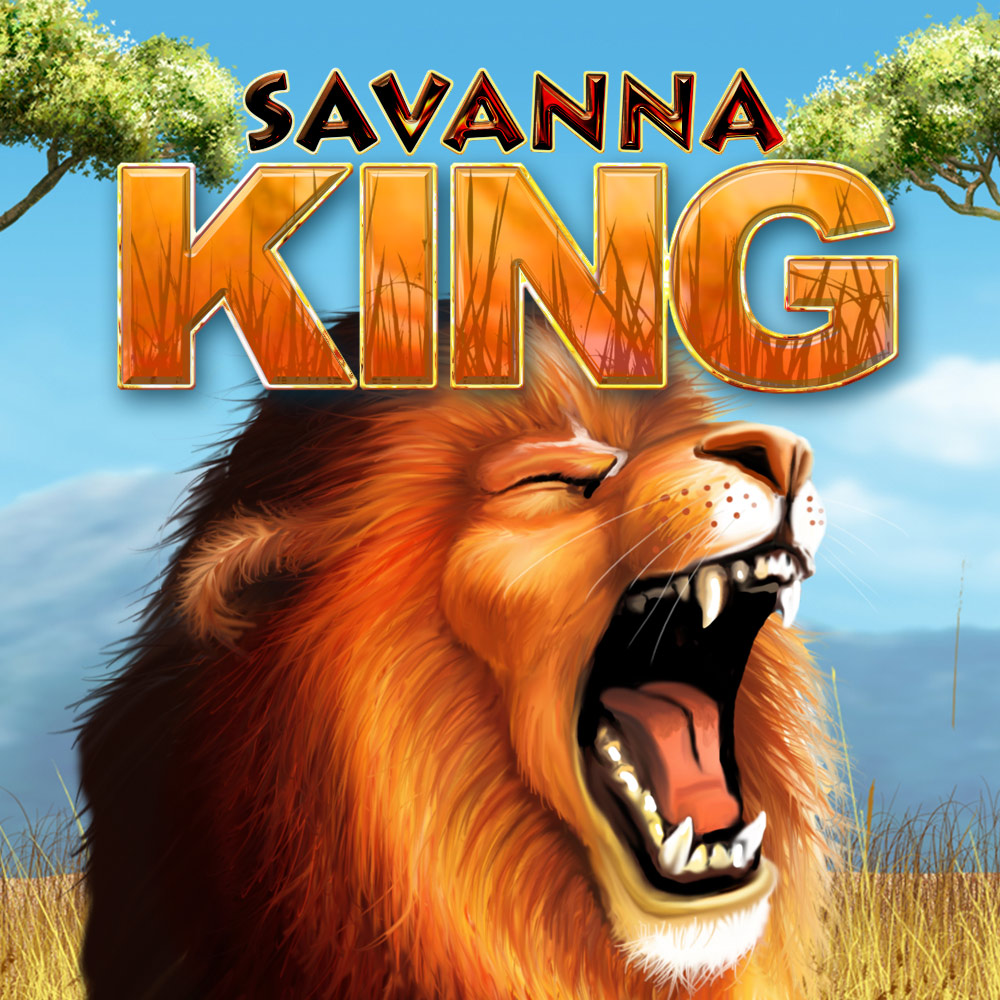 Presented by Genesis Gaming, Savanna King is a revamped version of its previous edition, packed with newer features, higher bonuses and exciting payouts. The 1024 ways all-way paying slot game follows the traditional 3-row, 5-reel format, but manages to stand out because of its novel concepts. On Savanna King, players now have four ways to go with the five reels, and 40 coins to play on each spin. The betting range on the game is impressive as well, from 0.80 to 3200, creating some room for every budget. The symbols on Savanna King are all inspired by the jungle life of Africa, featuring giraffes, zebras, rhinos and lions, among others. Special symbols include the African Shield Wild and the Game Logo Scatter. While the Wild can replace all other symbols on the reels except the Scatter to form new winning combinations and also reveal 2x, 3x and 4x Multipliers, the Scatters can activate and re-activate Free Spins during the game and augment your wins.
Savanna King’s brilliant graphics, soundtrack and premise are accompanied by four Progressive Jackpots – Mini, Minor, Major and Grand – of which the last one seeds up to a million! This highly rewarding slot game is a must-try for casino lovers looking to hit the high numbers while enjoying an entertaining concept of gameplay.

Presented by Genesis Gaming, Savanna King is a standard three rows, five reels slot game that has a little something extra to offer. The African Safari-themed online casino features an all-pay 1024 ways payline apart from some of the most attractive features in the form of Free Spins with Wild Multipliers, and more!Savanna King is a revamped version of the game’s previous edition by Genesis Gaming, now with four ways to go with the five reels and 40 coins played on each spin. Winners can earn rewards by matching symbols on adjacent reels, which adds to the unique gaming concept of Savanna King.
Add to that the impressive betting range on the game, from 0.80 to 3200, which makes the slot game suitable for every pocket size. The variety of symbols on Savanna King come each with different pay ranges. The low-paying ones include the playing card symbols of A, K, Q, J, 10 and 9. The medium to high-paying symbols include common African animals such as the Giraffe, the Zebra, the Rhino, the Lion and so on.
The African Shield is the Wild symbol on the game, and these Wilds can animate and reveal prizes in the form of 2x, 3x and 4x multipliers. At the same time, Wilds can substitute all other symbols on the reels except the Savanna King Logo Scatter. These Scatter symbols award players with 8, 15 and 20 Free Spins respectively upon landing 3, 4 and 5 symbols on the reels. Hitting two or more Scatter symbols re-triggers the round, allowing players to bank in more Free Spins.
One of the most interesting features of Savanna King’s gameplay is its Progressive Jackpot feature. Players can turn the Jackpot Wheel in the game randomly after any winning spin, and win from an array of real cash prizes and jackpot slots. Savanna King features not one but four such Progressive Jackpots, each seeding at a different range. These jackpots include the Mini, Minor, Major and Grand jackpots.
The Grand Jackpot is the biggest bonanza of Savanna King for it seeds at a million! Without a doubt, this poses the perfect opportunity for all slot lovers to fill their pockets enjoying a unique slot game with an equally unique premise. The animal-themed video slot game of Savanna King is a thrilling and highly rewarding online casino experience that you can play on a range of device types and operating systems.