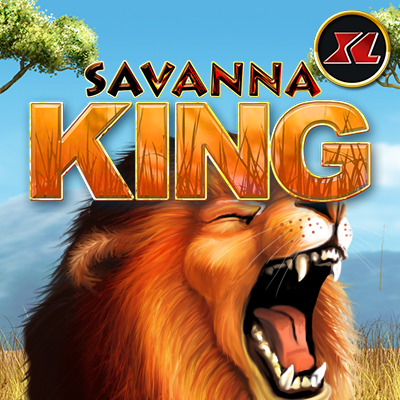 If you have played Savanna King slot games before, you’d be delighted to know about the all-new Savanna King XL slot by Qora Games that is quite similar to the previous versions in its series. The game features the lush greenery of Africa for its backdrop, along with its mighty animals on its reels. The visual effects and design detail of the game is certainly the first thing that catches one’s eye, but the soundtrack and features deserve equal applause. The reels exhibit both high paying symbols like Lions, Giraffes, Zebras, and Rhinos, and lower paying playing card icons of A, K, Q, and J. Some special symbols make appearances from time to time, brining in new winning opportunities for players. This includes the Wild symbol, with a native’s shield and arrow for its backdrop, which can substitute all regular symbols on the reels to create new wining combinations. Wilds appear on reels 2, 3, and 4.
The other exclusive symbol is the game logo Scatter, that can activate the Savanna Stampede free Spins bonus feature whenever 3, 4, or 5 identical Scatters land on the reels simultaneously. This feature can reward players with 8, 15, and 20 Free Spins respectively. Wilds may get multiplied together to create bigger winning opportunities for players, with the maximum value reaching up to 64x.
While the game has retained its 5 reels, 4 rows format, the RTP has certainly gone up beyond several other slot games, at 96.16%. Savanna King XL slot game offers up to 32,000x worth Jackpots as well, besides maximum earnings of $200,000. Whether you play it for free or for real money, the high volatility of the game ensures that players are always in for large winnings either way.

Savanna King XL by Qora Games is the third game in its exclusive series and has been designed quite similar to its former versions. The game is set in the wildlife-rich jungles of Africa, surrounded by lush greenery and varied animals. The visual design is truly impressive, with a clear blue sky in the backdrop, huge trees swaying on either side of the reels, and game elements designed with impeccable detail. The slot game follows a traditional 5 reels, 4 rows format with 1024 paylines. The reels have an array of exciting symbols to note, particularly the high-paying Lion, Giraffe, Zebras, and Rhinos. Lower value playing card symbols of A, K, Q, and J also appear frequently. While the cards and giraffe require three symbols of a kind to land simultaneously on the reels to give you a win, the zebra, lion, and rhino symbols require just two.
There is also a set of special symbols that gel in well with the overall thee of African wildlife, complete with swaying tufts of grass and stones. First is the Wild symbol, with a native’s shields and arrows for its backdrop.  The Wild can replace all regular symbols on the reels. When one or more Wilds is substituted in a win, the highest win is paid alone. Wilds appear on reels 2, 3, and 4.
Apart from the Wilds, the game also features special Bonus symbols in the form of the game logo. These symbols are the Scatters, which pay in any position. Landing 3, 4, or 5 Scatters, animated by the powerful antelope herd, will trigger the highly rewarding Savanna Stampede Free Spins feature. You can win 8, 15, and 20 Free Spins respectively for landing these.
During the feature game, all Wilds end up revealing Multipliers of 2x, 3x, or 4x. Multiple Wilds can also get multiplied together to give you even bigger rewards. Therefore, the 2x Wilds in the reel window will multiply all wins by 4. Potentially, you could win up to a massive 64x Multiplier – 3 Wild Multipliers of 4x each.
Savanna King XL has an impressive RTP compared to other slot games its type, for sure, at 96.16%. Players can expect to take the stake to a maximum of 5000x, while the rewards can go up to $200,000. That’s not all! You can also win up to 32,000x worth Jackpots, which means the game has huge rewards to offer no matter what your bet size. You could play Savanna King XL both for real money and free, either of which way the game’s high volatility makes it certain that your wins stay on the larger side.