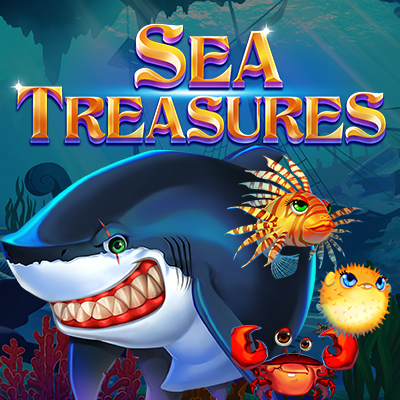 Bringing to our screens the marvels of marine life, Sea Treasures by Dragon Gaming is an exclusive new slot game that comes with a power-packed, highly rewarding gameplay. Designed with snappy cartoonish visuals and high-quality reel-spinning entertainment, the game boasts of several interesting features, symbols and characteristics throughout. The game’s symbols are an eclectic mix of various symbols, including playing card icons of A, K, Q, J and 10 adorned with ocean reeds, corals, shells and fish. The medium to high paying symbols on the reels includes a wide variety of marine creatures and objects, such as Octopus, Shark, Crab, Puffer Fish, and more. The Pearl Scatter is an exclusive symbol, landing three or more of which anywhere on the reels in a single spin activates the Free Spins bonus round. While the Free Spins can be retriggered depending on the number of pearls that appear during the Free Spins, you also win spins in proportion to the number of pearls that appear.
Interestingly, the Chest of Treasures that appear from time to time can activate Multipliers that augment your rewards. Another special highlight of the game is the Gamble feature, where players can gamble their wins to double or quadruple them in return of a good guess! While the game’s RTP may not be very impressive at just 94%, Sea Treasures certainly makes for a unique, fun-filled slot gaming experience overall.

If the sight of pearls, treasure chests and exotic creatures excites you, then Sea Treasures by Dragon Gaming is the perfect slot gaming recluse you should be enjoying in the moment. The all-new exclusive video slot game boasts of snappy cartoonish animations, packed with several highly rewarding features that render the overall game experience much more stunning and enjoyable than you could anticipate. Sea Treasures promised high-quality reel-spinning entertainment like no other game on the horizon, with plenty of exciting features to delve into. While you hunt down the Free Spins bonus, you could also gamble all your winnings and hope to land a few Multipliers down the line for augmented rewards. Symbols on the reels are an eclectic mix of marine creatures and objects, such as playing card symbols A, K, Q, J and 10 adorned with reeds, corals, fish and shells, an Octopus, a Shark, a Puffer Fish, a Crab, a Chest of Treasures, and so on.
There are several additional elements that the player must devote their attention to, such as the beautiful pearl symbols cased in a shell that serve as the Scatter symbols in the game. Landing three or more Pearl Scatters anywhere on the reels will immediately trigger five Free Spins initially. However, if the shell contains two or three pearls, you end up getting one and two extra spins respectively. The Free Spins can be re-triggered, with each new pearl that appears during the round adding an extra spin for the player to reap benefits from.
During the Free Spins feature game, various treasure chests in bronze, silver and gold appear on the last reel, awarding a Multiplier each time. This Multiplier can even be carried forward to the next spin, with any new Multipliers appearing on the reel getting added to the total. There is an upper limit of 15x, however. Finally, players can also bag prizes using a gamble feature, which allows you to gamble every winning spin. All you have to do is guess the right colour to instantly double your wins, and the right suit to quadruple them! However, a wrong guess will lead to you losing out on even your initial winnings.
Though the game RTP is far from impressive, at just 94%, the mid-high volatility of the game and its many exciting features more than make up for this gap. The 3-rows, 5-reels game comes with 10 fixed paylines, with left to right pay directions throughout.