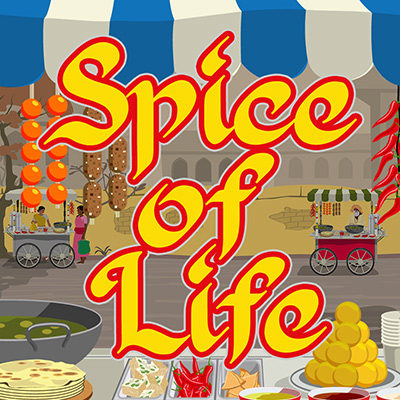 4.1 out of 5 stars.
Log in to rate the game
Spice of Life, developed by Saucify, is a standard 5-reel, 3-row video slot game themed around a tiny local village market in Bangalore, or Bengaluru, the capital of the Indian state of Karnataka. The online video slot game places local Indian delicacies, chiefly spices, on the focus, with the backdrop depicting the busy village life of locals. The traditional Indian music that plays in the background is interrupted at times with conversations between the locals.

The reels are on a food cart, with lanterns hanging from either side and a display of delicious Indian food at the bottom. The “Spice of Life” game logo is the Wild symbol, which can land on all reels to replace every other symbol except the Scatter. The Scatter is depicted by a two-wheeled doorless vehicle called a Rickshaw by locals. Other symbols in the game include a man, noodle, paprikas, and various other spices. There are also low-paying symbols of playing cards A, K, Q, and J.

Spice of Life also offers the Free Spins feature, for which players would have to land 3, 4, or 5 Free Spin symbols anywhere on the reels to win 10, 12, and 18 free spins respectively. The “Feature Game” bonus play round gets triggered when players have landed 3 or more Feature symbols anywhere on the reels. There are two different Feature Games to choose from and play for additional rewards.

Matching 3 or more symbols from left to right on the reels results in winning combinations, except the Scatter symbols which pay in any direction. Players can start with a minimum bet of $0.01, which can go up to a maximum of $62.50 per spin. There are 25 paylines and a cap of 5 coins per line. The game does not have any multipliers. Spice of Life has an impressive RTP of 96.15% and the top win can go up to 5875 coins, which is not bad either. With a colorful setting and plenty of symbols, this is one slot game that offers a medium-variance, relaxing and fun experience.

Log in and review this game
Share your thoughts with other players
Breaking away from the conventional slot gaming experience of fictional lands and warring teams, Spice of Life is one themed around something we all love – food! Developed by Saucify, this standard 3-row, 5-reel video slot game draws inspiration from the local Indian village market.
In the backdrop is a busy village street of Bangalore, the capital of the Indian state of Karnataka, and in front is a reel styled in the form of a food cart. The symbols used in this online slot game are colorful, varied, and tastefully picked out. A soundtrack of traditional Indian music often keeps getting interrupted by sound effects of conversations between the locals, adding a lot of life and vigor to the game.
Lanterns hang on either side of the reels while the bottom is adorned with various Indian delicacies. There are several exciting features that this slot offers such as wilds, scatters, free spins, and bonus rounds. The “Spice of Life” game logo acts as the Wild symbol for the game and can substitute any symbol on the reels, leaving the Scatter. The scatter symbol is a two-wheeled doorless vehicle called the Rickshaw in the local language. Other symbols in the game include a native man, noodles, paprika, and spices. These are the medium to high paying symbols of Spice of Life while playing card icons of A, K, Q and J are the low paying ones.
The “Free Spins” feature of Spice of Life rewards players with 10, 12, and 18 free spins for landing 3, 4, and 5 identical free spin symbols on the reels. The “Feature Game” bonus round gets triggered whenever a player gets at least 3 feature symbols anywhere on the reels. In this bonus round, players have to pick one out of two feature games that can win them additional prizes.
The rule of the Spice of Life slot game is simple and crisp – all you need to do is get at least 3 identical symbols from left to right on the reels, and you can win assured prizes. Only the Scatter symbol does not follow this convention – it pays both left to right and right to left. The bet sizes on the game can vary from $0.01 to $62.50 per spin, with wins going up to a maximum of 5875 coins. This medium variance game does not offer any multipliers though, and there is a cap of 25 paylines and 5 coins per line as well. Despite there being no multipliers, the extra features on the game make it a rewarding and enjoyable experience, lending it an RTP of 96.15% which is much better than the average of other online slot games.