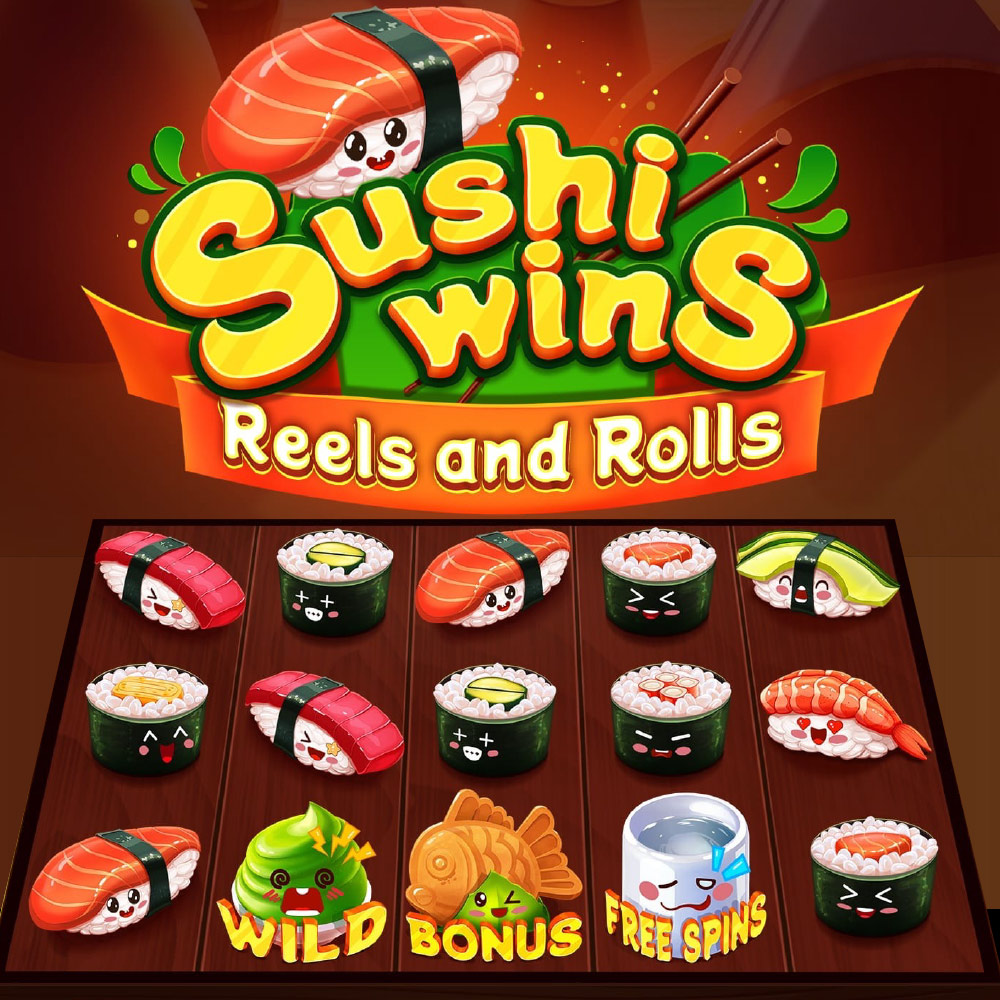 Sushi Wins by Qora Games is a traditional 3-rows, 5-reels video slot game that is based on the Japanese delicacy of sushi. Featuring a wooden table adorned with jars, juice, salt, pepper, and more, the game features vibrant and expressive sushi symbols on its central reels, and carefully detailed minimalistic menu options on the bottom and sides. The best part about Sushi Wins is the attention to detail in its graphics, along with its special gameplay features. Wilds appearing on the reels can replace all symbols other than the Free Spins and Bonus symbols. Expanding Wilds, when appearing on the third reel, are one step ahead and trigger Re-Spins alongside. The Free Spins are in the shape of a tumbler with a sloppy expression, and awards players with ten free spins and two multipliers whenever it appears on reels 1, 3 and 5. Bonus symbols appear on 2nd, 3rd and 4th reels, and allows players to multiply their latest bets.
Sushi Wins is available in more than 14+ languages and 50+ currencies, adding to its universal appeal. Apart from the delightful sushi symbols, the game’s high RTP of 96%, 20 paylines and medium volatility are reasons enough to give this game a try.

Combining our inherent love for sushi and for online casino games is the fun and cheery online video slot of Sushi Wins. The video slot by Qora Games is based on the quirky yet cute theme of Japanese restaurants, with the backdrop featuring a wooden table and kitchen utilities, jars, soups, sauces, and more. The central game reels feature mouth-watering sushi in rich varieties, along with special gameplay features that bring a lot of prizes for players. The visual and experiential detail of the game are to be commended, including tiny elements such as the game loading icon in the form of chopsticks, the variety of sushi and their emoji-like expressions, the graphic detailing of menu tables, and so on. The game menu and additional information have been arranged beautifully on the bottom and side, making the entire visual aesthetic seem quite aligned and breezy at the same time.
Special symbols on the game reels of Sushi Wins include the Expanding Wilds, which appear only on the third reel and trigger a Re-Spin feature. When one or more Wild symbols appear on the reels, they can replace all other symbols except the Free Spins and Bonus. The Free Spins are in the shape of a tumbler with a sloppy expression, and awards ten free spins with two multipliers whenever it appears on the 1st, 3rd and 5th reels. The sushi symbols are to be given special attention, for their attention to detail and interesting variety makes the game really enjoyable and interesting.
Sushi Wins also has other features to offer to players, such as the Auto-Play button for those who do not wish to wait for all turns to roll out one-by-one. They also have options to enable and disable sound effects, background music or quick spins feature. There is a lot of scope for customisation in this game, which is pretty unique and interesting at the same time. The classic 3-rows, 5-reels slot game comes with 20 paylines in all, and all pay from left to right starting from the first reel. Wins on different lines get added, followed by multiplying by the bet per line. The highest win only is accounted for on each line.
Sushi Wins is perfectly compatible with different types of devices, including laptops, desktops, and mobile phones, as well as Android and iOS platforms. The game is available in more than 14 languages and over 50 currencies, adding to its universal appeal. With an impressive RTP of 96%, Sushi Wins makes for a highly rewarding gameplay for beginners and pro players alike.