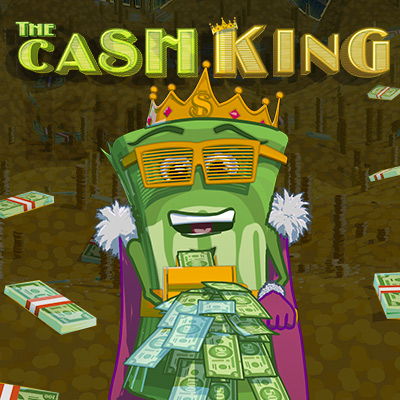 4.3 out of 5 stars.
Log in to rate the game
The Cash King is a standard 5-reels, 3-row slot developed by Saucify that is devoid of any fancy themes – just good old cash on a slot game. The number of paylines is restricted to just 10, but there are plenty of in-game bonuses to make the most of. The money-themed slot game is a quick-paced play that offers players the opportunity to garner hefty prizes, making them a “cash king”.

The backdrop shows a treasure land, with piles of coins and note bundles stacked around, for as far as you can see in the distance. The treasures are literally forming mountains and heaps as far as you can see. The appearance of the game is, otherwise, pretty simple. There are both random and stacked wilds in the game – the stacked wild symbol can replace any symbol on the game other than the Scatter, while the random wild turns any symbol wild for that spin.

The symbol with Cash Stash written across it is both the Scatter symbol and the feature. 3 or more such symbols anywhere on the reels activate the Cash Stash feature. This is the special feature of the Cash King slot game, which rewards users with prize values proportional to the size of the bet that triggered the Feature game. There is an additional gamble feature for those who are tempted to try their luck and double their money once the reels have stopped spinning.

Other symbols on the reel include a wallet, a piggy bank, a trunk filled with cash, and a pile of treasures with coins and note bundles which is the highest paying of them all. Low-paying symbols include playing card icons of J, Q, K, and A. Coin sizes on the game can range from a minimum of 0.01 to a maximum of 0.50, which is a fairly inclusive range for all pocket sizes. With a maximum of 5 coins per line and a total of 10 paylines, bets on the game can range from $0.01 to $25. All wins are from left to right, except the Scatter symbol which pays both ways.

Log in and review this game
Share your thoughts with other players
If you are bored of too loud and rigorous slot game themes online, chances are you are seeking out something relevant and simple. The Cash King fits into this description perfectly, with a standard 5-reels, 3-row slot grid, and the absence of any fancy theme whatsoever. The theme of the game is simple and straightforward – collect as many treasures as you can, and become a cash king! This money-themed slot game is fast-paced and offers a large number of treasures for players to stay engaged and curious for more.
In the backdrop is a vast treasure land. As far as you can see, there are heaps of coins and bundles stacked in large mounds, disappearing into mountains of treasures near the horizon. Keeping this aside, the overall appearance of the game is rather simple and clear. The game features both random and scattered wild symbols. While the random wilds can turn any symbol wild for a particular spin, the stacked wild symbols can appear and replace any symbol on the game except the Scatter.
The symbol with “Cash Stash” written across serves both as the Scatter symbol and the feature. Winning three or more such symbols anywhere on the reels activates the bonus feature round, where players can win additional cash prizes proportional to the size of the bet that triggered the round. The other USP of The Cash King is its “gamble” feature that offers enthusiastic players the chance to try their luck and double their money once the reels have stopped winning.
The Cash King also has other symbols on its reels such as a wallet, a piggy bank, a chest filled with currency notes, and a stack of treasures, both coins and note bundles. This stack of riches also happens to be the highest paying symbol out of all. The Cash King also has some low-paying symbols in the form of playing cards, but they are still valuable to add to your total winning amount. With a cap on the number of paylines, that is 10, and also the coins per line at 5, The Cash King can be considered a low-variance gaming option. However, its betting range between $0.01 to $0.25 and coin size range from 0.01 to 0.50 is quite impressive. All payouts are from left to right, except the Scatter which pays both ways.