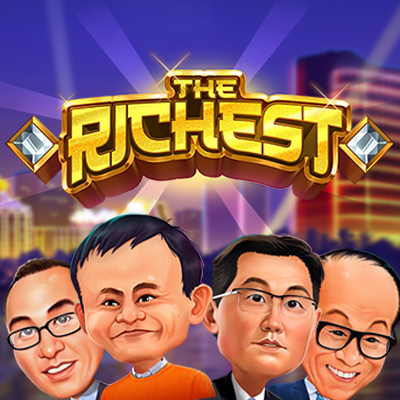 The Richest is a new slot machine from Dragon Gaming based out of Macau – the Vegas of the East. Players in the game are dressed up like wealthy businessmen who are trying to compete and make more money. The four businessmen symbols dominate the reels, and are also the game's highest-paying symbols. Additionally, the reels feature mid-level symbols like an aeroplane, yacht, watch, and credit card in addition to low-level ones like the playing card symbols A, K, Q, J, and 10. All symbol combinations follow the left to right counting rule.
The Richest's Jackpot feature is unquestionably its most appealing feature. Each time a Wild symbol appears on the reels, the golden bag at the top of the screen fills up with more money. When the suitcase is fully loaded with valuables, it automatically bursts open to start the jackpot round. To access the hidden treasures in this game, players must unveil the playing cards in front of them. Each card contains one of the four jackpot values. When three of a kind are revealed, you win the jackpot!
The Richest also includes a Free Spins bonus feature. Players must hit 3, 4, or 5 Scatters to win a payout of 5x, 10x, or 50x along with a bonus of 10 Free Spins. All low value symbols are automatically removed from the reels during this gaming round.
This medium volatility slot boasts a 94% return to player (RTP), a conventional three-row, five-reel structure, and five fixed paylines. These may not be the most enticing or profitable characteristics for a slot game, but The Richest more than makes up for them with its unique storyline, breathtaking graphics, and fascinating in-game characters based on the world's richest businesses.

Rightfully called the Vegas of the East, Macau is where dreams come true for treasure-hunting entrepreneurs. Dragon Gaming’s latest slot offering called The Richest is based out of this opportunistic city where players don the hats of wealthy businessmen out to compete and amass more money. They are surrounded by private planes, yachts, luxury watches, and platinum credit cards on their quest to hit the jackpot and become ‘The Richest’.Symbols on the reels are predominated by four gentlemen. These businessmen are the highest paying symbols on the slot. Apart from these, the reels also feature mid-tier symbols like plane, yacht, watch, and credit card, while low-tier symbols comprise playing card icons A, K, Q, J, and 10. All symbol combinations count left to right.
The most attractive feature of The Richest has to be its Jackpot feature. Every time a Wild symbol appears on the reels, the golden suitcase at the top gets filled with more money. Once the suitcase is brimming to the top with riches, it automatically bursts open, triggering the Jackpot round.
Here, players must reveal the playing cards before them to unveil the treasures held within. Each card contains one of the four jackpot values. Once you have revealed three cards of the same kind, the jackpot is yours!
Apart from this highly rewarding game, The Richest also has a Free Spins bonus round. Players must land 3, 4, or 5 Scatters to earn a reward of 5x, 10x, or 50x along with a bonus of 10 Free Spins. All low value symbols get automatically removed from the reels during this game round.
With its conventional 3 row, 5 reels format and 5 fixed paylines, this medium volatility slot has an RTP of 94%. While these are not the most enticing or rewarding features for any slot game, The Richest more than makes up for them with its unique premise, brilliant visuals and fun in-game characters inspired from the wealthiest businessmen of the world.