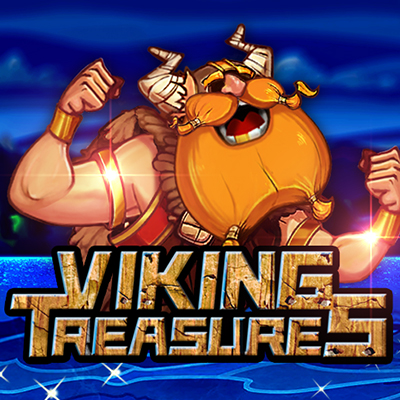 Qora Games has come forth with the fan-favorite theme of Vikings and their fierce adventures in the form of the Viking Treasures slot game. The 4-rows, 5-reels and 50-paylines slot game revolves around the story of a heavily bearded Viking on a mysterious sea-faring exploration, as he takes the player along to explore the hidden treasures of the ocean. Holding a mug in one hand and an axe on his back, the Viking stands lofty against the backdrop of huge sea waves and snow-capped peaks. Added to this rugged landscape is the prospect of huge rewards, such as from the treasure chest Wild that can replace all other symbols on the reels to form new winning possibilities, except the Scatter. The Scatter symbol offers payouts of up to 50x your line bet in the form of Free Spins bonuses.
Whenever a Wild appears during a Free Spin feature game, however, it ends up getting locked in its position until all Free Spins have been used and is called the Locked Wild Free Spin feature in the game. The game’s impressive RTP of 96% and high volatility together combine to render this slot game a favorite among those who are seeing huge rewards despite high risks from the casino gaming universe.

The Vikings have long been a slot gaming favorite, with multiple developers and games seeking the legendary warriors for their theme. However, the concept gets an exciting new twist with the Viking Treasures by Qora Games. The 4-rows, 5-reel, 50-paylines online casino game takes players on an epic adventure to uncover hidden treasures from the depths of the ocean. One of the first game elements that catches the eye is the heavily bearded Viking holding a mug and carrying an axe on his back. It seems the warrior has just embarked upon a new voyage with his wooden ship, as the players witness massive sea waves and snow-capped peaks in the backdrop. Each time a player scores a win, the Viking leans against a treasure chest which opens and scatters a few golden coins. Tentacles of a mysterious sea creature also keep appearing from time to time to remind that this beast is lurking somewhere in the dark waters.
The treasure chest actually stands for the Wild symbol in the game, which can replace all regular symbols to form new winning combinations for players. On the other hand, the Scatter symbol is represented by crossed axes. The Scatter gives a payout worth 50x your line bet for landing five of a kind symbols at once. The crossed axes symbol might also lead you to unlock the highly rewarding bonus feature – the Locked Wild Free Spins.
When at least three Scatter symbols emerge on the reels during a single spin, players are awarded with 10 bonus games. Now, when the Wild symbol appears anywhere on the reels while the Free Spins feature continues, it will get locked in the same position until you use up all the Free Spin rounds. You cannot re-trigger the Free Spins feature during the game though.
Apart from a thrilling and immersive slot storyline, Viking Treasures stands out due to its fast gameplay and state-of-the-art animation. There are so many coins to earn, so many rewards to bag! With an impressive RTP of 96% and high volatility, this game is perfect for slot lovers who want to take bigger risks in return for bigger rewards.
If you want, you can also play this game for free instead of real money to get a hang of its rules, gameplay, and excitement beforehand. You can play Viking Treasures on both mobile and tablet devices alike, and the game also supports multiple languages and currencies.