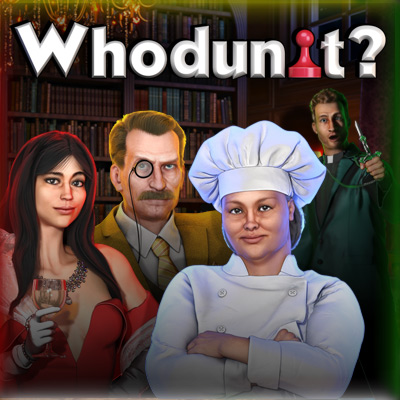 4.6 out of 5 stars.
Log in to rate the game
Whodunit is an online slot game developed by Saucify that is based on the mystery/detective genre. At the center of the theme is a crime that must be solved. The game features various mysterious characters that include a man wearing a monocle, a fancy woman, a priest, and a chef. Whodunit is set against the backdrop of a library and offers a range of exciting features as the game proceeds.

The 5-reel, 3-row slot game features simple gameplay, but several interesting features such as auto-play, free spins, multipliers, wilds, scatters, and bonus rounds. There are 40 paylines and players can adjust their total bet before spinning the reels, which is calculated as the bet per line multiplied by the paylines and coin size. Bet size can range from €0.01 and €50. This makes the game a great choice for every pocket.

The Whodunit logo acts as the wild in the game and can replace all other symbols except the scatter. The monocle-wearing man is the highest-paying symbol which gives players a hefty reward of 1500x their bet for landing 5 symbols on any paylines, 500 for 4, and 125 for 3. The woman, priest, and chef are other high-paying symbols while the gun, alcohol, cross, and rolling pin are in the medium range. Finally, the playing card symbols of J, Q, K, and A form the low-paying symbols. Payouts are from left to right.

The Whodunit bonus round is triggered when players land three or more Feature symbols anywhere on the reels. Doors with random prizes behind them appear on the screen, and the player can pick one to get a cash prize proportional to the bet they were playing the base game with. Landing 3, 4, or 5 scatters anywhere on the reels gives players 8, 12, or 15 free spins respectively. They can also get a 2x multiplier on all their wins when the free spins are triggered, a highlight of the game.

Whodunit has an above-average RTP of 95.4%, allowing players to win up to 17,340 coins as they enjoy Whodunit’s bonus features. The game is compatible across a range of devices, such as mobiles, desktops, and laptops.

Log in and review this game
Share your thoughts with other players
Developed by Saucify, Whodunit is a 5-reel, 3-row video slot game that features several characters inspired by the crime mystery genre. This unique slot game manages to stand out of the crowd through its range of interesting features including auto-play, free spins, multipliers, bonus rounds, scatter symbols, and wilds, to name a few. The slot game has a library in the background along with other interesting visuals to look out for.
The symbols on Whodunit are in keeping with the theme of the game and are equally mysterious. These include a monocle-wearing man, a fancy woman, a priest, and a chef along with others; all of these symbols are high paying. The monocle-wearing man is the highest paying symbol on the slot, offering 1500x the bet to players if they get 5 identical symbols on the payline, 500 times for 4, and 125 times for 3. On the other hand, the symbols of gun, alcohol, and rolling pin are medium-paying. The lowest paying ones are the playing cards such as J, Q, K, and A. Payouts are from left to right, just like is the convention in several slot games.
The bonus round on Whodunit gets triggered whenever players land three or more Feature symbols anywhere on the reels. In this round, players have to pick one out of five different doors, each with random prizes behind them. Each of the choices guarantees impressive coin prizes proportional to the bets of the base game. The game also features scatter symbols, which give the players 8, 12, and 15 free spins on getting 3, 4, or 5 of them respectively on the reels, besides doubling their wins.
Whodunit video slot game offers a maximum of 40 paylines, but players are free to choose their total bet before playing the game. Bet sizes can range from €0.01 to €50, thereby making the game perfect for every pocket. The game offers a return to players of around 95.4%, which is slightly higher than the average for other online slot games. At the same time, the maximum limit for wins in Whodunit is 17,340 coins with the game’s features. Whodunit is available across a range of devices, including mobiles, desktops, and laptops.