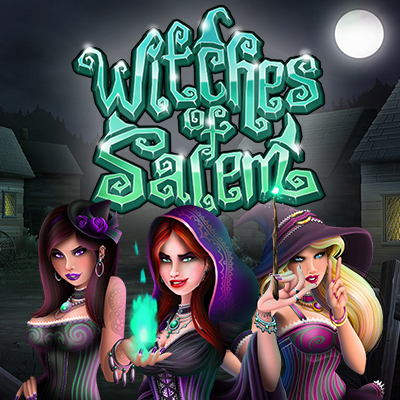 Based on the historic legacy of the Salem witch trials, Witches of Salem features a trio of spellbinding sorceresses at its fore and a highly rewarding gameplay. The game features a dark and stormy night for its backdrop, and goes perfectly well with the sea-green coloured spooky mist, game title and reel features. Free Spins, Multipliers, and Jackpots are just some of the highly rewarding features that this exciting slot game boasts of, against the backdrop of the sleepy, creepy, and coastal town of Salem. As the player enters the world of spooky surprises, they are in for the Wheel of Witchcraft upon landing three or more Scatter icons simultaneously.
Other symbols on the reels include the three witch sisters, a black cat, a bubbling cauldron, a potent potion, a tasty toad, the apple of the occult, and jewel-studded playing card icons of A, K, Q, and J. The Wheel of Witchcraft Prize Wheel round can activate one of the three jackpots – Mini, Minor, and Major. The game offers low volatility and a near-average RTP of 95.72% to complement the interesting backstory, making the game ideal for all kinds of slot lovers with varying pocket sizes.

Drawing from the interesting legacy of Salem and its historic witch trials, the Witches of Salem is a 243 line, five reels slot game with a trio of spellbinding sorceresses in focus. With a dark stormy night for its backdrop, the game features an array of highly rewarding features, including Free Spins, Multipliers and Jackpots. Witches of Salem has a dark and eerie background with a characteristic sea green colour pairing for the reels, the game title as well as features. The sleepy, creepy, coastal town of Salem with its wild witches is up for some mischief, as the players are led into a world of spooky surprises. The game features a special Wheel of Witchcraft that gets activated whenever three or more Scatter icons appear on the screen.
The slot game also features in-game jackpots – mini, minor and major – that can be won in the Wheel of Witchcraft Prize Wheel round. The reels also feature other symbols such as three witch sisters, the black cat, a bubbling cauldron, a potent potion, a tasty toad, the apple of the occult, and jewels-studded playing card icons of A, K, Q, and J. The low volatility game with an RTP of 95.72% offers 0.01-, 0.05- and 0.10-coin sizes.