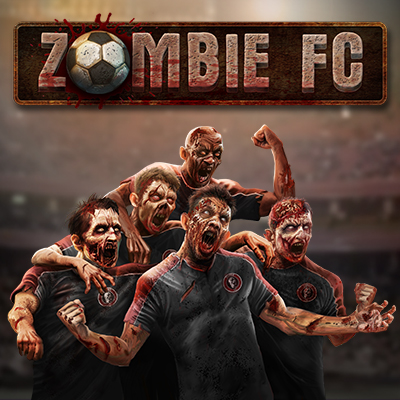 Landing on your screen right from the fan-favorite themes of zombies and horror, the Zombie FC by Qora Game is one online casino slot that you cannot give a miss. Apart from its perfectly calibrated theme, the game also has some of the most significant prizes to offer, making its chilling gameplay even more interesting.The game sticks to the traditional format of 3-rows and 5-reels and is lined with highly rewarding features like regular Wilds, expanding Wilds, tumbling reels, and free spins. For the backdrop we have a fully packed stadium and rows of lofty buildings fading into the horizon, while the game’s fore is lined with enthusiastic zombies taking the lead in the upcoming football match.
Symbols on the reels comprise high-paying zombies as players, coaches, referees and even fans, and medium to low-paying football jerseys with numbers from 7 to 10. There are some special symbols like the Football Wild that can substitute all regular symbols on the last 3 reels creating new winning possibilities, the Expanding Wild zombie player that can expand to cover the entire reel where it appears, and the Bloody Trophy Scatter, landing three of which gives you 15 free spins, four give 20, while five lead to 25.
Along with a convenient betting range from $0.5 to $100, the Zombie FC slot by Qora can also be played for free for you to get a hang of it. The game’s RTP is not known, but suffice it to say that with a max cash jackpot of $1200, this slot is certainly worth a try.

Zombie FC by Qora is the perfect destination for slot lovers who prefer quirky themes like horror and mystery when it comes to online casino experiences. But that’s not all! Besides its one-of-a-kind theme, the Zombie FC particularly Stands out because of its significant prizes making the slightly fearsome gameplay a worthwhile fun. The slot follows a traditional format of 3-rows and 5-reels, and comes packed with features like regular Wilds, expanding Wilds, tumbling reels, and free spins together with its exciting gameplay. Instead of paylines, the game offers 243 ways to win. Impressively, the backdrop of the game has been designed as a stadium taken over by the undead, as the football match is about to begin!
With these fearsome creatures taking the lead, the zombies appear in the game as players, coaches, referees and even fans, all of which are the various high paying symbols on the game. There are also football jerseys with numbers from 7 to 10 that offer low to medium payouts. The game has been brilliantly designed to the detail, with a stadium full of fans in the backdrop, followed by high rise buildings fading away to the horizon.
Apart from the regular icons already described above, there are also some special ones such as the Expanding Wild zombie player, the regular Wild Football, and the Bloody Trophy Scatter. The football wild Can replace all regular symbols to form new winning combinations whenever it lands on the last three reels. The zombie player expanding wild, on the other hand, covers the entire reel whenever it lands anywhere in the game. As far as the scatters are concerned, landing three will give you 15 free spins, four give you 20, while five will reward players with 25 free spins, triggered with the possibility to win up to 10x multipliers.
The betting range is fairly vast, from $0.50 up to $100.00, thereby suiting all pocket sizes. You can even play the game for free, as a demo, before you get the hang of the game and are ready to play it for real money. The game’s RTP is not known, but What we can say for sure is that with a Max cash jackpot of $1200 and an array of highly rewarding features, the Zombie FC is one slot you cannot give a miss.