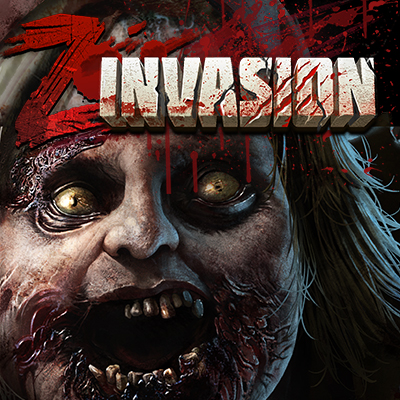 The common concept of a zombie apocalypse consuming a whole society is explored in Dragon Gaming's Zombie Invasion. The game takes place in a chaotic city plagued by a terrible illness that threatens to wipe out humanity. People who were once healthy are now turning into zombies, and ordinary people must work together to stop the untimely disaster.Lower paying playing card icons A, K, Q, and J appear on the reels of Dragon Gaming's 3 rows, 5 reels video slot game, all dressed up to match the gruesome Zombie Invasion action. Other character icons include the grenade, accountant, butcher, flight attendant, influencer, and leader, in addition to the officer, politician, and waitress.
The Escape Infected City Bonus Game is a special bonus round included in the game. The main objective for players in this round is to climb to the top of the hospital building and escape the infected city via helicopter. The building's five stories are represented in the game by five levels, each of which can be accessed via one of five portals. Players must pick one of two outcomes: a prize and advancement to the next level, or the game being terminated.
Aside from the above, Scatter symbols appear on occasion in the Zombie Invasion slot. Landing three, four, or five scatters on a single spin will award 10, 15, or 20 free spins, respectively. If the scatters reappear during the round, players will be awarded more free spins. Random Wilds can be awarded to the player at any time during the game.
With 30 fixed paylines and a betting range of 0.30 to 90.00, Zombie Invasion provides players with very comfortable gaming. While the RTP of 94 percent may have been better, Zombie Invasion provides a rewarding overall experience, with a top payout of 22,500 for the base game and 90,000 for the feature.

Based on the popular theme of a zombie apocalypse taking over an entire civilization, Zombie Invasion by Dragon Gaming features a chaotic city for its backdrop, plagued by a lethal virus threatening to end the world as we know it. Healthy people are turning into zombies, and ordinary citizens must now come together to put an end to the unexpected crisis. How? By defeating the all-powerful army of brain-hungry monsters. The horror-themed video slot game is, undoubtedly, one of the freshest and most intriguing premises among other slot games today. It manages to not just send shivers down the spine but also keep players on the edge of their seats as they are lured into an exciting and potentially profitable adventure.
The 3 rows, 5 reels video slot game by Dragon Gaming features on its reels the lower paying playing card symbols of A, K, Q, and J, all decked up to resound with the gory setup of the Zombie Invasion gameplay. There are also character symbols of the grenade, the accountant, the butcher, the flight attendant, the influencer, and the leader, apart from a policeman, politician, and waitress.
There is a special bonus round in the game as well, which is called the Escape Infected City Bonus Game. The primary goal of players in this round is to get to the top of the hospital building and escape the infected city by helicopter. The five stories of the building are depicted in the gameplay in the form of five succeeding levels, and each level can be accessed through five different doors. Players must select the doors to get either one out of two possible results – the first is a prize and progression to the next level, while the second is game termination. Players can collect whatever they have received in the game so far and walk out of the bonus game from here. Each level during this special round also offers a multiplier that can go up to 1000x for the lucky few!
Apart from the above, the Zombie Invasion slot also features Scatter symbols from time to time. Landing three, four, or five scatters simultaneously during a single spin will yield 10, 15, and 20 free spins respectively. The scatters can reappear during the round and grant more free spins to players. During this game, the player also has a chance of being awarded, Random Wilds.
With 30 fixed paylines and a betting range from 0.30 to 90.00, players get the benefit of very convenient gameplay in Zombie Invasion. The RTP of 94% could have been better, but with a max payout of 22,500 for the base game and 90,000 for the feature, Zombie Invasion makes for a rewarding experience overall.