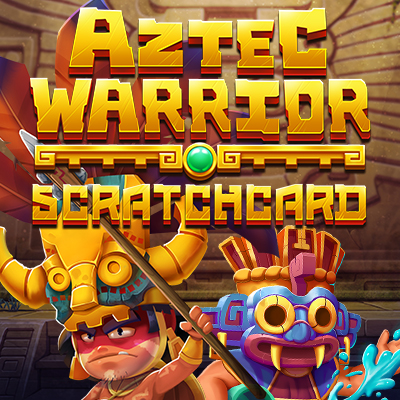 Aztec Warrior is now available as a fun new scratch card game, following the phenomenal success of Dragon Gaming's video slot game of the same name. The old and colourful Aztec warrior clan inspired the idea, characters, and rules, which have mostly stayed unchanged. The backdrop is a verdant Mexican forest, with masked warriors and Aztec gods Huitzilopochtli and Tlaloc serving as emblems.To win, players must match three symbols, including Scatters, to trigger a free bonus game round. During this one-of-a-kind round, players can win up to ten times their initial bet. You'll earn 10 free spins if you get three scatters. After each winning spin, players can spin the Wheel of Fortune, which sets a multiplier between 2x and 10x over and above ordinary game rewards.
Aside from that, the game's other rules are simple and easy to follow. There are seven symbols in total, one of which is a Scatter. Multiple sets of three symbols may appear during the same spin, in which case all of your winnings will be merged, increasing your win potential.
The medium high volatility scratch card game offers a small coin range of 0.1 to 20, as well as a maximum return of 650x for the base game, which may turn off high-risk gamblers. When the option is enabled, the payout multiplies by 6500, which is quite impressive. The RTP of the game is 95%, which is average compared to other scratch card games on the market, but the enjoyment and aesthetics more than make up for it.

In the wake of the unprecedented success of the same-named video slot game by Dragon Gaming, Aztec Warrior is now available in the form of a refreshing new scratch card game. The theme, characters, and rules are still pretty much the same, inspired by the ancient and vibrant Aztec warrior tribe of ancient times. In the backdrop is a lush Mexican forest, while masked warriors and Aztec gods Huitzilopochtli and Tlaloc appear as symbols. All players need to do to score a win is match any three symbols, including Scatters that unlock the door to a free bonus game round. During this special round, players can win up to 10x their stake. Landing three scatters will win you ten free plays. After every winning spin, players can get to spin the Wheel of Fortune, which then determines a multiplier between 2x and 10x over and above other game winnings.
Other than that, the other rules of the game are quite simple and beginner friendly. There are seven symbols in all, along with a Scatter. Multiple sets of three symbols might appear during the same spin, in which case all your winnings will be grouped together, thus maximizing the win potential.
The medium high volatility scratch card game offers a small coin range from 0.1 to 20, and a maximum payout of 650x for the base game, which might not seem very enticing to the high risk-takers. With the feature included, the payout reaches a value of 6500x, which is impressive enough. The game has an RTP of 95% to offer, which is fairly average considering other scratch card games in the offing, but the entertainment and aesthetics more than make up for these shortcomings.