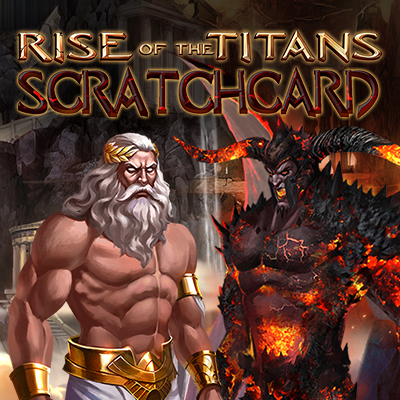 Rise of the Titans Scratch Card

Rise of the Titans is a new release from Dragon Gaming that reintroduces the attraction of one of the company's most successful slot games, but with a twist! The scratch card game is based on the same-named slot machine and takes place in Ancient Greece, during the war between Zeus, Poseidon, Athena, and Hades and Titan-King Kronos.Now it's only a matter of taking a gamble and scratching your way to the gods. The original scratch card game is set in Olympus, the mythical home of the Greek gods, where the best players can win a variety of prizes. The symbols in the scratch card game are identical to those in the slot machine game. The only difference is, here you get a 3x3 layout and eight different symbols, not to mention the unique scratch card concept.
Several Greek Gods and the Titan were the high-paying symbols in the original slot game, while A, K, Q, and J playing card icons were the low-paying symbols. Free Spins and Multipliers, on the other hand, are accessible in the scratch card version of the game.
To win, a player must match identical symbols on the card in any order. Each symbol pays out both the original bet and a multiplier. If you acquire two or three sets of three symbols at the same moment, you might win. The RTP on this medium-high volatility scratch card game is 95%, and the coin range is 0.10 to 0.20. The maximum payoff in the base game is 650x, while the maximum payout in the free game is 6500x. Surprisingly, the game may be played on almost any device and operating system.

Rise of the Titans is one of Dragon Gaming’s latest offerings, bringing back the charm of one of its most massive slot gaming hits with a twist! The scratch card game is based on the slot game of the same name, and revolves around the Gods of Ancient Greece, where Zeus, Poseidon, Athena, and Hades have waged war against Titan-King Kronos.All you now need is to trust your luck and scratch your way to the gods. The innovative scratch card game is set in the mythological land of Olympus, the home of the Greek Gods, with plenty of riches to be won by the best. Symbols in the scratch card game have been maintained just like its slot gaming counterpart. Only, this game is restricted to a 3x3 layout and eight different symbols.
The original slot game had different Greek Gods and the Titan as the high-paying symbols, and playing card symbols of A, K, Q, and J as low-paying ones. In the scratch card version of the game, however, you will find features such as Free Spins and Multipliers.
All that a player needs to do to win is match identical symbols anywhere on the card. Each symbol not just pays the original bet along with a corresponding multiplier. You may even land up winning in case you land two or even three sets of three symbols at once. With an impressive RTP of 95% and a flexible coin range from 0.10 to 0.20, this medium-high volatility scratch card game offers a base game maximum payout of 650x, and a free game maximum payout of 6500x. interestingly, the game can be enjoyed on any operating system and device of your choice.