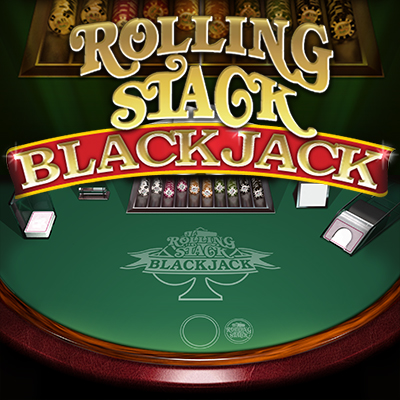 Presented by Rival Gaming, Rolling Stack Blackjack is a powerful and unique online casino table game that dwells on the same premise of a blackjack game, but with a twist. Players can leverage the benefits of a side bet while being assured of high returns and relaxing gameplay.To win, players must get one out of the various types of two-cards starting hands in the game, which includes an Ace-King Suited, Straight Flush, Pair or Straight types. If a player gets to start their game with any of these hands, they are in for a win! Whether they want to take their winnings or continue adding them to their standard blackjack wager is completely dependent on them.
The most interesting aspect about Rolling Stack Blackjack is the high Return to Player it offers besides such an interesting premise, which is 97.21%. Apart from the simple and sleek appearance of the game, in keeping with the minimalist classy style of a casino table game, Rolling Stack Blackjack also brings in an array of rewards for players if done right! Available for playing across software platforms and devices, this is one online casino game that you cannot afford to miss if you are a fan of table or card games.

Proudly presented by Rival Gaming, Rolling Stack Blackjack offers a fresh take on blackjack with an exclusive side bet. As you might already be aware, Blackjack is a special card game where players must target being dealt cards with a higher count than that of the dealer, but never exceeding 21 in total. The Rolling Stack Blackjack game by Rival Gaming dwells on the same premise, but with an interesting twist.In this inventive online casino game, players must get one out of the following two-card starting hands – Ace-King Suited, Straight Flush, Pair or Straight. Once a player starts with any of these hands, they can either take down their winnings or add them to their standard blackjack wager for greater rewards down the line – the very concept of a rolling stack!
The appearance and theme of the game also borrow extensively from the real-world vibes of a blackjack game. On the periphery are new, unrevealed cards to play with, resting on a green casino table. The sleek and minimalistic game appearance makes for appealing gameplay, with menus carefully placed at the bottom without too much text on display. The dark-themed game gives off very relaxing, playful vibes that keep the player hooked to the game and its many rewards.
The player must make a standard blackjack wager. If they want to make the Rolling Stack wager for any amount within the predefined limits, they may do so and receive their first two cards after this wager. Any bet will win only if the first two cards are any of the four mentioned above.
With an impressive Return to Player of 97.21%, Rolling Stack Blackjack is all set to redefine the world of online casino table games. As the game unfolds and players record high wins, Rolling Stack Blackjack is all set to become one of the most preferred online casino experiences of its kind.