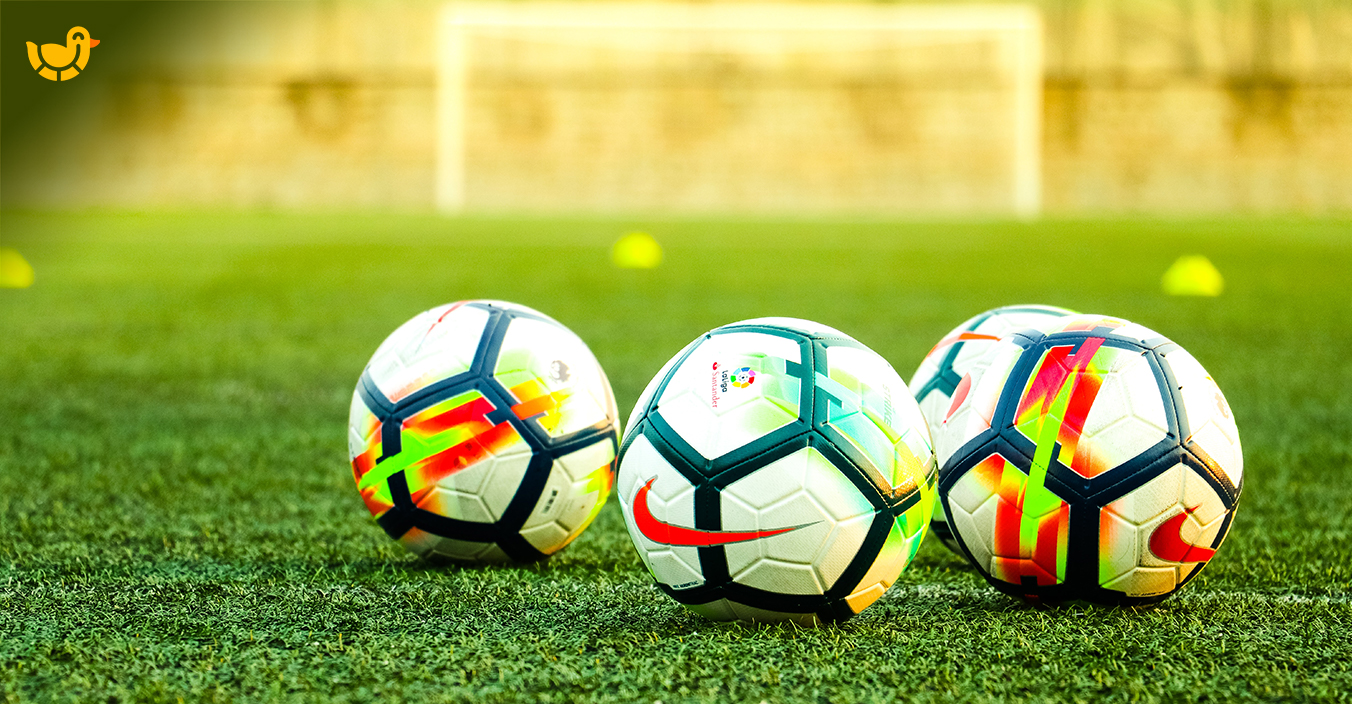 For sports fans and gambling enthusiasts what better way to team up your two favorite pastimes? DuckLuck has a great selection of sports-themed slots to satisfy your twin obsessions. From motor sports that’ll rev your engine to field sports that will having you cheering in the stands (figuratively speaking of course), there’s a slot that will get your pulse racing. Here are some of our favorites.

This is a must for football fans! It has all the elements and atmosphere of the game – the roar of the crowd, cheerleaders with their pompoms, the players, the ref, helmets, footballs and the chain crew with their markers. The helmet symbol is Wild, offering lots of winning combinations. In addition, any symbols involved in a winning line will be replaced by drop icons to potentially create even more winning chances. Three Scatter symbols (the football) appearing on the gameboard will win you 15 free games, and during this round your wins are randomly multiplied by 2, 3, 4, 5 or 10 times. There’s a lot to play for in this great slot – go team!
Play Gridiron Glory!

This is one is a must for the hockey fans. Hockey Enforcers comes with an authentic soundtrack of echoing shouting, sticks clashing, and crashing into the side walls, creating the atmosphere of a real hockey game. This 5-reel, 3-line slot has 243 paylnes. The gameboard is a goal net, with the icons depicting various players (two even having a bit of a fight), the referee and even an ice girl. The flaming puck is the Scatter which awards 15 free games when three land on the reels and offers some very generous rewards during play. The goal light is the Wild and appears frequently, also occasionally filling an entire reel, creating more winning opportunities.
Play Hockey Enforcers!

This slot was developed to coincide with the 2010 Soccer World Cup, hosted by South Africa. The gameboard is surrounded by colorful national flags and the slot has a very simple mechanism, exactly like the original ‘fruit machines’ in land-based casinos. The three reels offer only one payline when matching icons are all perfectly landed in the centre of the reels. In additions to soccer-related symbols such as the World Cup gold trophy plus a silver and bronze one, a soccer ball and refereee, icons include the traditional bars of the one-armed bandits. While gameplay is pretty simple and straightforward, there are opportunities for some tidy cash winnings. For example, three World Cup trophies pays out 100x your bet. If you’re looking for something uncomplicated and laid back, this is the ideal slot for you.
Play Global Cup Soccer!

Spend a thrilling night at the races with this stock car racing-themed slot. Fast Lane Freddie has some great money-spinner features like Expanding Wilds and 2x Multiplier Wilds which take up an entire reel. There are two games-within-a-game features – the Drag Race and Bonus Race. Choose a car for the Drag Race, and if it wins expect a really nice payout. The Bonus Race is interactive and requires you to pass other cars to race to the finish line. All in all, this slot provides great entertainment.
Play Fast Lane Freddie!

Welcome to the dark side! If you have a taste for the ghoulish and gory, you’ll love this slot. In a post-apocalyptic world, zombies have taken over, playing soccer in a derelict stadium where even the grass on the pitch is dead and brown. Cue an eerie soundtrack and you have the perfect ambience for this weirdly fascinating slot. Players, manager, ref and even a shapely supporter are blood-spattered, dishevelled and sunken-eyed in their tattered clothing. Winning symbol combinations explode into clots of blood. The battered soccer ball is Wild while the bloody trophy is the Scatter, dishing out 15 free games when three or more land on the reels. Can you defeat the zombies? Probably, as there are plenty of winning opportunities in this slot.
Play Zombie FC!

Anyone for cricket? This is no gentle Sunday knock on the village green, but the highly competitive professional game with a huge following, played in many countries around the world. Cricket Legends is a 5-reel, 3-line slot with 243 paylines. The gameboard is set against a cricket stadium and the reels are populated with players, an umpire and coach. The normal JQKA card symbols are represented by cricket jerseys. The cricket ball is the Wild icon and can appear on reels 3,4 and 5. There is also another Wild, a player which covers an entire reel and provides plenty of opportunities for winning combinations. The Scatter symbol is a trophy and three or more landing on the reels awards a Free Spins round. This slot also has the drop icon feature, where winning symbols are replaced by others that could create more winning combinations. Excellent graphics help make this game a pleasure to play.
Play Cricket Legends!

Featuring sleek supercars and bodacious babes, we’re not sure whether ‘fast’ refers to the cars or the girls, likewise ‘sexy’ could apply to both! This slot has a really innovative gameboard, shaped like a moving sportscar with the five reels as its spinning wheels. This game is rich in features, including the Bonus Games feature where you choose three cars, each of whose value is multiplied with the others for a substantial win.
Play Fast & Sexy!

Without a doubt, our most popular Arrow's Edge slot. Play for victory with your teammates, coach, and of course the gorgeous cheerleaders. This action-packed slot features 5 reels and 15 pay lines and brings players all the excitement of a live football game.
The slot features an exciting Thrill mode where increased winnings are available as well as a free spin round, expanding wilds, a bonus game, and much more.
Play 4th and Goal!

The sports connection in Bulletproof Babes is martial arts, practiced by the bevy of ninja girls who are central to the game. This slot is unique in appearance as well as offering some great gameplay. A combination of Japanese anime film and manga comics coupled with traditional Eastern art and symbols make for an interesting and unusual combination. This 5-reel 4-line game has 20 paylines and features five manga-styled ninja girls corresponding to the five elements of wood, fire, earth, metal, and water, which are rendered as traditional woodcuts. Additionally, the symbol of a fist touching an open hand is a Scatter, while a girl in a straw hat is Wild. There are two other symbols – a moon (which only appears on the first reel) and a Japanese temple (which will only land on the fifth reel). When these appear together, a Free Spins round is awarded. During the game, especially after a big win, ninja girls appear from the sides to dominate the scene in rather spectacular fashion. And finally, this slot features a progressive jackpot that is triggered at random with the potential to pay out 40,000 times your base game bet!
Play Bulletproof Babes!

Basketball takes to the gritty streets of NYC in this authentic slot that emulates the public courts (street cages) in the city, complete with graffiti. This 5-reel, 3-line slot has 243 paylines. There’s talent aplenty in these pick-up games and, for you, ready money to be won. There’s loads of action with free games awarded and expanding wilds to up your winning chances. Unique to this slot is the Reels Spray feature that sprays graffiti over winning symbol combinations and replaces them with others to potentially trigger more wins. The bets on this slot range from $0.60 to $120.00, making it suitable for both casual players and high rollers.
Play Streetball Star!

And with the above, are you ready for the kicker? (See what we did there?) Here's the beauty of sports-themed slots: It requires no skill level to earn those big wins.
Nor does it require a proper environment, such as soccer field, cricket pitch, ice rink, or otherwise. From the comfort of your own home - or wherever you choose to play your online slots - you can enjoy the sports you love.
So lace up, suit up, ante up, and let's get in the game.